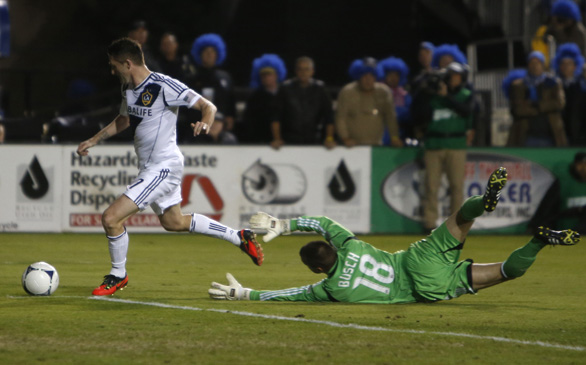 The Los Angeles Galaxy opened the Western Conference Finals with a commanding 3-0 victory over the visiting Seattle Sounders FC on Sunday night before a sold out crowd at the Home Depot Center in Carson.

With the first leg win, the Galaxy hold a 3-0 aggregate advantage going into the second game (Nov. 18 at 6 p.m.) that'll take place in Seattle. It could have been more, however, despite Robbie Keane scoring twice and Mike Magee hitting the back of the net once. L.A. couldn't capitalize on several opportunities, but Seattle's goalkeeper Michael Gspurning deserves a lot of credit for that.

Galaxy head coach Bruce Arena liked the game's results, but noted that the two-game series is far from over.

“We played very well tonight against an excellent team and we’re not foolish enough to believe that this thing is over," said Arena. The game in Seattle on Sunday is going to be a real difficult game and we have to have our team ready to play.”

The Galaxy took a one goal lead into halftime when Keane tallied a score during stoppage time of the first half after a productive Landon Donovan chipped a pass over the Seattle defense. Keane then out jumped Adam Johansson to send a potent header past the Sounder goalkeeper.

Donovan admitted that Keane's goal ignited an offensive break through.

“That was huge. We didn’t play all too well in the first half, created a couple chances but we weren’t all that dangerous, so to break through right before [halftime] I think broke their back a little bit and then our second half was terrific,” Donovan said.

Magee made it 2-0 in the 64th minute before Keane added another three minutes later for the eventual 3-0 edge that led to a second consecutive playoff win for L.A. Keane scored twice against the San Jose Earthquakes last Wednesday in the squad's 3-1 favorable outing.

L.A. visits Seattle over the weekend to decide who advances to the MLS Cup in early December. Earlier this season, Seattle defeated L.A. 4-0 at home. Keane is aware of that, as anything could happen.

“I think it’s up to the lads, the senior players who have a lot more experience than the other guys to make sure that they know that this is by no means over,” he said.