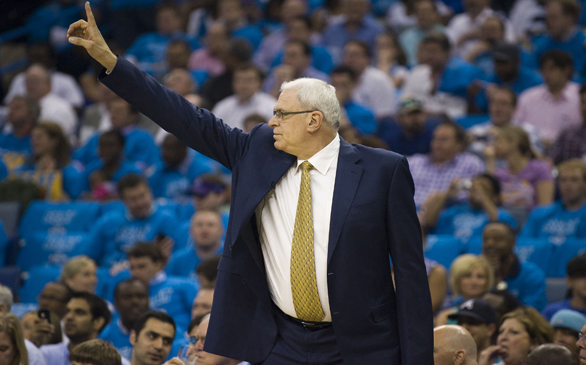 As head coach, Phil Jackson could have been a perfect fit for the Los Angeles Lakers.
(Credit: Kevin Sullivan/Orange County Register/MCT)

“After speaking with several excellent and well-respected coaching candidates, Dr. Buss, Jim and I all agreed that Mike was the right person at this time to lead the Lakers forward,” said Lakers General Mitch Kupchak in a prepared statement released by the organization Monday noon.  “Knowing his style of play and given the current make-up of our roster, we feel Mike is a great fit, are excited to have him as our next head coach and hope he will help our team reach its full potential.”

But this will hurt the Lakers chances of winning back-to-back NBA Championships. In terms of basketball, it's not a good move. Nevertheless, the team did what it had to do to not be humiliated by Jackson, according to Yahoo! Sports.

The Lakers weren’t willing to meet Phil Jackson’s demands. Although it is understandable as to why the Lakers wouldn’t and didn’t give Jackson what he wanted, they should have. Jackson is the closest and surest thing to wining an NBA Finals title; over the years, he’s proving it. Just ask him to show you his 11 championship rings – six with the Chicago Bulls, five with the Lakers.

To hire D’Antoni over Jackson simply means two things: it’s a cheaper way to get a new coach and the Lakers didn’t want the triangle offense anymore in their organization, both short and long term.

Late Sunday night, D’Antoni reached a three-year deal, worth $12 million, with the Lakers. Also, it includes a team option for a fourth. Despite the ongoing reports that it was Jackson’s job to turn down, that never happened. The Lakers didn’t allow that to happen. According to ESPNLosAngeles.com, had negotiations gone well between his agent and Laker management on Monday, Jackson was ready to accept the job. The Lakers didn't wait long enough; they went another direction.

But the Lakers  should have waited until Monday to make a decision, particularly after negotiating with Jackson's agent. Eventually, Jackson could have changed some of his demands to better fit a potential deal. Now, will never know. Although Jackson was asking for a lot, the Lakers should have waited at least one more day to decide who'd coach the club.

Multiple media outlets reported some of the demands Jackson made, including a two-year deal worth $10-15 million per season, an ownership stake, limited road travel to games, having both Brian Shaw and Scottie Pippen on his coaching staff, and the power to make personnel decisions. In brief, Jackson wanted what Pat Riley has with the Miami Heat. The Lakers didn’t want to give him that.

Rumor has it that Jackson was seeking an associate head coach, one he could mentor and give the reigns to when he re-retired after a couple of years. This meant the triangle system was to remain in tact for years to come. The Lakers didn’t see a need for that, not even a need for Jackson to be deciding personnel moves.

But Jackson is worth of all that money and power. He really is because he has seen it all over his coaching career, and his experience could have been fruitful in the Lakers’ post-Kobe Bryant era – a time that fans don’t even want to begin thinking of.

Hiring Jackson now would have made the Lakers an instant championship contender. All this talk about the triangle offense not working with the current roster is non-sense. Along with Bryant, Pau Gasol, Metta World Peace, and Steve Blake have the necessary expertise to run such system. Steve Nash and Dwight Howard would have turned out more than okay. Just ask Derek Fisher and Shaquille O’Neal what it accomplished for them, respectively.

Now, with D’Antoni (who just had knee surgery, is not cleared to fly, and had a phone interview with the team), the Lakers will be one of the most entertaining and productive clubs in the NBA. But I don’t see them as a championship contender. They still lack youth, a solid bench and speed to shut down the Oklahoma City Thunder, Heat and, believe or not, Clippers.

D’Antoni is known for his offensive schemes, which will be much fun to watch. But this current Laker roster isn’t a fit for that. They lack the outside shooters, and aren’t built to run back and forth on both ends of the floor. In a nutshell, this means Gasol could be on the move rather quickly. The Lakers wouldn’t mind shedding his contract for youth and outside shooting help (i.e. Atlanta Hawks’ Josh Smith). Who knows what would happen, but we do know that Gasol certainly doesn’t fit in this equation. Don’t be surprised if he’s traded.

Even though naming D’Antoni as the next head coach is not a wrong move, it is indeed a bad decision that will hurt the Lakers. I sure hope I’m wrong, however, because the NBA is more exciting when the purple and gold flourish.