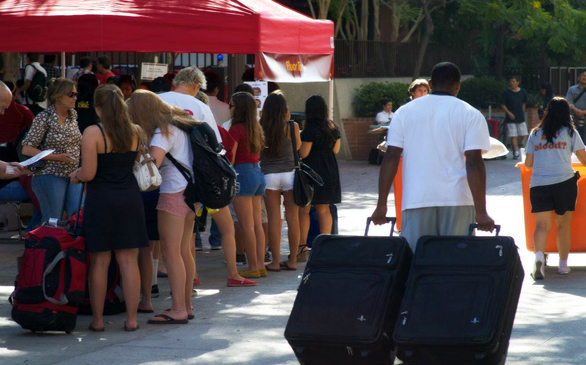 For the 11th year in a row, the University of Southern California enrolled the most international students of any U.S. college or university in the 2011-12 school year as rising numbers of Chinese students pursued American education, according to a new study.

USC hosted 9,269 foreign students, up about 7 percent from the year before, according to the annual report by the Institute of International Education, in partnership with the U.S. State Department.

USC, which recruits strongly in Asia, was badly shaken in April when two Chinese graduate students were slain in a botched robbery near campus. As a result, some education experts said USC might suffer a decline in Chinese enrollment this fall despite the school's efforts to inform Chinese students about increased security measures.

But USC reported increases this fall in both its overall numbers of full-time foreign students, up 9 percent over last year, and Chinese students, up 20 percent. (The Open Doors study covers an earlier period and includes part-time students and other groups.)

USC's dean of admission, Timothy Brunold, said the slayings received widespread coverage in Chinese media and that USC addressed the incident directly in communications with accepted students last spring. USC "acknowledged the weight of the terrible incident" and detailed extra anti-crime efforts by city and campus police, he said.

In the aftermath of an on-campus shooting Halloween night that wounded four, none of them USC students, the school last week announced additional security measures, including restricting late-night entrance to campus.