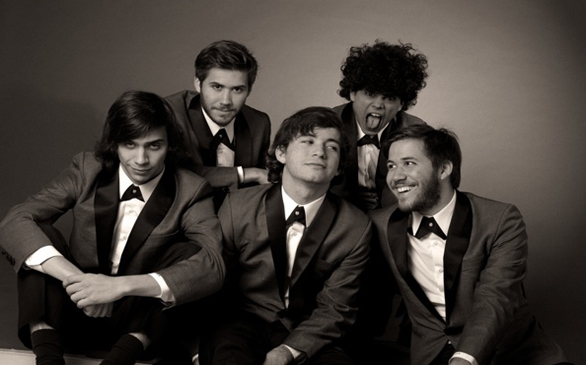 Venezuelan rock group Los Mesoneros are on the rise, musically. What started off as a fun project is now a dream come true for the band.

The five-member music act is up for four Latin Grammys, including Best Rock Album for their project Indeleble, Best Rock Song in "Indeleble," Best New Artist and Best Recording Package.

During the month of October, Campus Circle held an exclusive interview with Los Mesoneros while they were in Los Angeles for a few days of promotion and press availability. Each member gave particular input on the group’s career, album, Latin Grammy nominations and other things.

Campus Circle: Tell us about the term, “Mesonero” and what it means?  How is it that you came up with and decided on the artistic name, “Los Mesoneros”?

Juan Ignacio Sucre: The word means ‘waiter’, or ‘server’, especially in Venezuela. We thought the name would serve for interesting imagery. But mainly we found it elegant, and something that would be easy for people to remember.

Luis Jiménez: Yes, in 2006. At that time it was more of a hobby than anything else. We would get together after school and just jam. Then, in 2009, we began to take it more seriously and began composing songs.

CC: So how is it you all know each other?

JIS: Two of us are brothers, and we’ve all been friends since school. We had the same classes and everything.

CC: The group has 4 Latin Grammy nominations. What were you guys doing when you found out about the nominations and how did you instantly feel?

Andrés Belloso: I was in class at the university, and I stormed out of the room, called my mom.  I knew the nominations would be announced that day. I didn’t have either high or low expectations, but nevertheless I was surprised and very happy with the 4 nominations.

Carlos Sardi: I was out running. I figured I had to do something to take my mind off the nominations. I knew anything could happen. When I got back, I saw several messages letting me know about the nominations. I thought it was one. I didn’t know it was four.

CC: Do you guys see the nominations as an accomplishment?  Do you feel that it is a victory in itself?

CS: Yes. We feel that being able to do what we love to do is a great accomplishment in itself. To even be nominated for an award is as if we won something. We are being nominated and maybe winning an award for doing what we love. It shows you’re doing something right and that people recognize it.

CC: Out of the 4 nominations, is there one that stands out above the rest?

JIS: Yes, Best New Artist. We feel that’s the one that would help the group the most, with international exposure and recognition. It’s a category that includes all sorts of genres, not just one, and to win that would help us tremendously.

CC: Tell us about the lyrics of the song, “Indeleble”?

LJ: It’s about how all problems have a solution and what it means to search for those solutions. You need to try and find options, and think outside the box. It also talks about how your mistakes and failures all can bring positives to your life. You learn from the bad occurrences and that stays with you, and helps you in the long run. It makes you who you are.

CC: The song “Cicatriz” is very curious. What can the group tell us of this tune?

LJ: Musically, at least, it’s one of our favorites. It has similarities to “Indeleble.” It talks about how scars never go away, about things that have happened in your life that stick with you. It’s unusual in that it doesn’t have a chorus. This song almost didn’t make it into the album. We finished it the day before we met with the producer.

CC: In general, what is the album, Indeleble, about? Did you guys have a concept in mind when you started or did it just randomly materialize?

AS: We put the album together in two stages. First, we had a collection of five songs that we all participated in. The second part consists of songs that showcase us individually or just two of us. When our producer Hector Castillo arrived in Caracas, he added a bit of his style and ideas to the album. One of the most significant is he suggested that whatever we did in the studio we had to be able to do live. Nothing too “over-produced”, and we were very happy with the result.

CC: Is there a theme or an inspiration that pervades throughout the lyrics of the group’s songs? Or are they based on several different concepts and life experiences?

LJ: There are various aspects to our songs. Some are very personal to us as individuals and some are about beliefs and messages we as a group want to express. We try to make sure we do both.

CC: Comment on any musical influences the group has had over the years, and especially now that the group is officially a group?

AS: Different types of Latin American music and music from Venezuela, rock from Argentina, old British rock like Pink Floyd, Café Tacuba, Foo Fighters, Kings of Leon, Sound of Brooklyn, Black Keys, Spoon, and there are many more. We’re always on the lookout for new things.

CC: What do you guys like about Los Angeles?

CS: The people and the rock energy that you feel. Everyone’s very friendly and very liberated.

CC: What does the group have planned after the Latin Grammy celebrations on Nov. 15?

AS: We have a couple of concerts coming up, and then we plan to shoot a video.  We also want to travel to bring international exposure.

CC: Is a tour around the United States a possibility in the near future?

LJ: Yes…the idea is to eventually visit cities like Los Angeles, Miami, and other cities with large Latin communities, as well as Mexico. It’s a large market.

CC: So how is it you all can balance your collegiate studies and a music career?

JIS: There’s a saying that music careers kill education, and honestly, for us, the music is first. We should actually be in class right now. Music is first, but it wont hurt to have a plan B. But whatever happens, happens.

CC: Anything else to add?