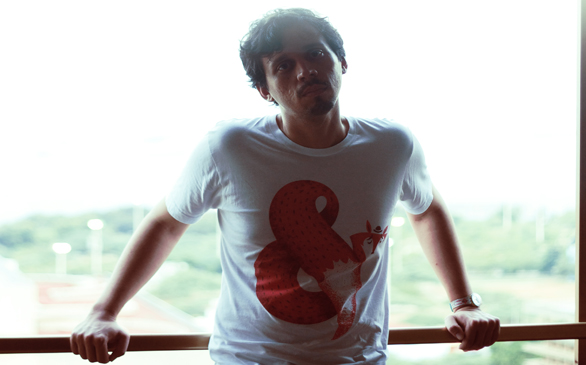 Ulises Hadjis is quite the bright person. Hadjis, a Venezuelan singer/songwriter of Greek descent who also teaches at the University of Zulia in Maracaibo, has a bachelor's degree in sociology and a master's degree in philosophy.

Hadjis found his passion for music as a kid when he grew up listening to his father played the piano. Now, Hadjis, who is considered Venezuela's best kept secret in terms of music, is up for three Latin Grammy awards this coming Nov. 15 in Las Vegas. His second album Cosas Perdidas has been nominated as Best Alternative Music Album, while the first single "Dónde Va" for Best Rock Song. On top of that, he's up for this year's Best New Artist honor.

Campus Circle recently had an exclusive phone interview with Hadjis, who was located in his native Venezuela at the time.

Campus Circle: How and when did you discover your passion for music?

Ulises Hadjis: The first experiences with music were when I was a kid. My dad used to play the piano a lot in the house. My parents are divorced, so it wasn’t every day. It would be more like once a week.  He was an awesome player. He also played the guitar and harmonica. When I was 12, in middle school, I joined guitar lessons. It wasn’t that I had an ear for music or anything, but the idea of having a rock band was very important. So I started playing guitar, and listening to The Beatles and a lot of Latin rock, like Soda Estereo and Café Tacuba.  It was when I started playing other people’s songs, and playing covers, that I realized I wanted to write my own music, and I enjoyed it tremendously. That’s when I discovered my passion for music.

CC: If you had to select one artist or band who’s had the biggest influence on you musically, who would it be and why?

UH: The main one I would have to say is The Beatles. All the music and their books, the chances they took, it’s a philosophy I try to apply to my own work. Tito Paez would be the second one, in Spanish music. Their lyrics and style were very inspiring.

CC: You’re nominated for 3 Latin Grammy awards. Tell us how you found out you were nominated and what did you instantly feel and what you were doing at the time?

UH: I was at the university teaching in class. Then, I got called to the office, where I took a call letting me know about the nomination. The Dean asked to have a meeting with me, and also my girlfriend and my manager texted me, “Ulises, you got your first nomination.” It was very exciting. They always tell you that awards like these are manipulated, and that only rich people with influence get nominated and win. I’m not rich, and I don’t know if I’m lucky, but I work a lot. It’s proof that with enough work, you can get recognition.

CC: One of the nominations is for Best Rock Song, for the tune, “Dónde Va.” How was that song written?

UH: I wrote the lyrics with a friend. At the time when I met him I didn’t like him, but we eventually became friends. He was always saying we should work together. There were some lyrics I couldn’t finish that were very difficult for me, so I called him.

CC: What would you like to tell the people of Los Angeles about your upcoming Nov. 17 show here?  Is there anything you would like to share with them prior to the show?

UH: I would like to tell them that I would like to see them at the show. I’m really interested in the city I really want to go there. I know there are a lot of Latinos there, and I’m excited to meet them.

CC: What can you tell the young kids who want to pursue a musical career?  What advise can you give them?

UH: I would advice getting a good musical education. I would tell them to join some sort of musical group, and to write music they would like to hear. I want to say that it is possible to make it in the music industry making music that you like, not just music you think people will like. It is really, really important that they make music they like.

UH: That I’m looking forward to seeing them in Los Angeles. Keep in touch on Twitter and Facebook, and always be yourself. Be a slave of your desires. You should see that desire and learn how to make that desire a reality.