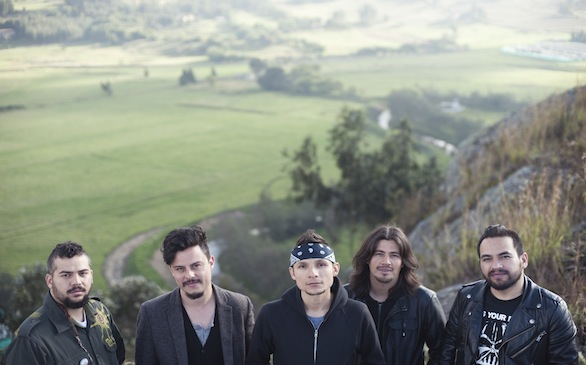 Doctor Krápula is a five-member music group from Colombia.
(Credit: Courtesty of The 3 Collective)

Doctor Krápula is truly an old school band. This five-member music act comes straight out of Bogotá, Colombia, and they carry an inspirational repertoire.

Most often than not, the band produces tunes talking about social issues: protecting the planet, caring for animals, loving all races, and having a change of mind in certain aspects of life and how one lives, among other things. With that in mind, the band mixes rock and Colombian ska in their beats and sounds.

Campus Circle: How is it that you guys came up with the name, Doctor Krapula? It’s something very unique. Are you paying a tribute to someone?
David Jaramillo: We used to have a different name about 12 years ago. Then, we had some member changes, and really became an entirely different group. That’s when we decided to change our name, to something that would reflect what was going on politically at the time.

CC: Your group uses a vast fusion of genres like ska, rock, reaggae, and tropical. What have been the group’s musical influences throughout the career?
DJ: We’ve spent most of our time as a band in Bogotá. Bogotá is a melting pot of cultures from all over the country and the world. They all bring their musical influences of all kinds, from coastal/Caribbean music, to Andine music, to classic rock like the Rolling Stones. We don’t limit ourselves on where to find inspiration for our music. We try to not characterize ourselves under just one genre.

CC: It seems that the majority of the group’s songs make an attempt at changing the way people view certain aspects of life, like protecting the planet, animals, and love for all. Were these believes you’ve had all along and wanted to share? Or did these come about randomly? How is it that you decide what message your music sends?
DJ: It’s a bit of all of the above. We felt not many people were talking about these social issues. We were very critical of several social issues in the beginning. But as time went by, our music enabled to explore many different places, and it made it realize just how powerful a voice can be. A voice can shape and change culture. We’ve had the opportunity to explore different types of music, and even people who live in very remote areas, and can’t record their music, are still happy and it still shapes their lives. This makes us have a higher obligation to do the same with our music. Our songs aim to protect and preserve life, to raise awareness about protecting nature, and protecting what resources we have left.

CC: This is the third Latin Grammy nomination for the group. This time it is in the category of Best Rock Song for “Exigimos.” How did you find out about the nomination, and how did you all feel?
DJ:  It was a great surprise for us. This is the third time. We knew we were amongst the pre-selected artists for nomination, but were surprised because we didn’t even think the song would get any airplay at all – it is VERY critical about several things that are going on, including how multinational corporations are destroying farmlands and displacing farmers from their homes, and how the majority of Colombians want a dramatic change in government. The name of the song is “we demand,” and we tried to compile all the issues our people are facing today. This song has become an anthem for us. The fact that it’s been nominated makes us believe we’ve got the right ideas about these issues and that we’re doing the right thing by expressing them. It’s made us realize people now look at music as something more than just entertainment.

CC: What would you like to tell to the people of Los Angeles about the album Viva El Planeta?
DJ: It’s the first album we’ve recorded at a studio live, in the style of the 40’s and 50’s. Michael Jackson and Pink Floyd also recorded at that same studio. The final product was a source of great joy for us, and we’ve recorded different versions of every song. The album also has collaborations from many different artists and it gives the album a very diverse aesthetic.

CC: How soon can a tour be here in the U.S.?
DJ: We’ve played in different American cities already, and we plan to make arrangements while we’re in Las Vegas for the Latin Grammy celebrations (Nov. 15). We will most likely have set dates by the end of the year.

CC: The group’s Facebook and Twitter have a large following. What do social media sites mean to the group?
DJ: These sites are what allow is to stay as close to our fans as we are. We have almost 700,000 people following us on Facebook, and we use it constantly to get feedback, to see what they want to listen to, and what they wish we wrote about. We also engage in dialogues that are very constructive for our music.

CC: What do you guys do with your free time, if you have any free time at all?  Do you guys do things together?
DJ: We spend most of our time together, so whenever we have a little free time, we each try to spend time with our families and other friends, or go on vacations.