Piso 21 Can Only Go Up From Here On 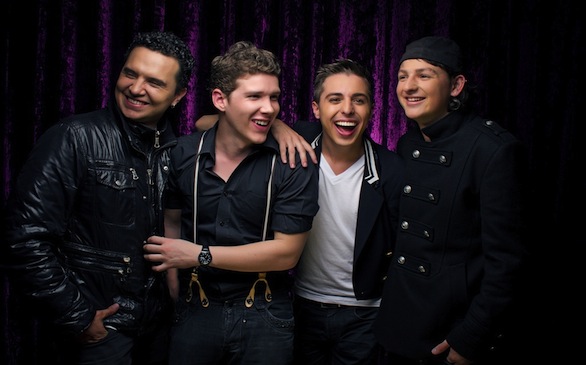 Piso 21 is a four-member pop music act of Colombia.
(Credit: Courtesty of The 3 Collective)

Piso 21 is a four-member pop music group from Medellín, Colombia composed of Pablo Mejía (Pablito), Juan David Huertas (El Profe), David Escobar (Dim) and Juan David Castaño (El Llane). The band formed in 2007 when each of them attended a BBQ get-together that a friend in common planned.

This year, Piso 21 is nominated for Best New Artist at the Latin Grammy celebration that takes place Thursday, Nov. 15, in Las Vegas. Their self-titled album, Piso 21, has hit the music waves in standout fashion. In Colombia, it's received much attention for its musical purity and the talent they sport.

Escobar took the time to speak to Campus Circle directly from Colombia. He had a lot say regarding the group's artistic name, the forming of Piso 21, musical influences, album, and Latin Grammy nomination, among other things.

Campus Circle: Tell us about the artistic name of the group, Piso 21?
David Escobar: “Piso 21” is the name of a building in the city of Medellin in Colombia. It was a very tall building in an important part of the city, and the top floor had a 360-degree panoramic view. It was in this floor where we first began composing and singing our songs, singing covers from Sin Bandera and other bands. When the time for our first show came, we didn’t even know what we would call ourselves. When they asked us what our name was, we had to decide on the spot, so we agreed the name had to have meaning for all four of us in the group; so what better name than the place where we worked on making our hopes and dreams come true? Where we began writing our songs, and dreamed about conquering the city beneath us? So that’s when we decided on “Piso 21.”

CC: How do you all know each other? How is it that you came together as a group? Were you all childhood friends, or friends from school?
DE: I honestly see this as a blessing from God because we had only known each other for six months before starting the group, which was six years ago. When we met, our only common bond was the music. We were these young kids, 18-19-year olds, who loved to compose music. As the years went by, we all had the same goals and same dreams. Years later we’re still the same four from the beginning. We’re all very good friends. We feel music has given us each three new brothers, always there for each other. We’ve become a family, that’s what we are.

CC: What are the group’s musical influences? There are four different mindsets and opinions in the group, and differing tastes are bound to exist. How have you guys been able to integrate your individual influences into the group?
DE: True. We’re four very different individuals, but we can all agree on pop, because it allows us to do whatever we want. Our youngest member loves Anglo-pop, like Michael Jackson, Coldplay, and the sort. Another member likes urban pop like Black-Eyed Peas and hip hop, Spanish rap and reggaeton. The oldest likes rock like Guns-n-Roses, classic rock, and Bon Jovi. I grew up listening to a lot of Luis Miguel and Tito Rodriguez. We all combined our influences and tastes and discovered that the place they met was in pop. Our different influences and tastes have never clashed. We’ve always been able to combine them into a style all our own, and people really like it.

CC: The video of “Correr El Riesgo” is very appealing and interesting. It’s very contagious; it’s got a nice rhythm and it’s something people can move to, while at the same time you can really reflect on the lyrics. Tell me about the song’s lyrics.
DE: “Correr El Riesgo” came about in the studio, with the collaboration of our producer Pablo Uribe. We were at a stage in our lives where we were taking risks. It’s a happy song you can dance to, dedicate to someone, with lots of guitar. We integrated a more acoustic rhythm, and it’s a bit happier than normal for us; and it’s opened a lot of doors for us.

CC: And the group’s self-titled album, Piso 21, can be classified in a similar manner? Or is it something different?
DE: The album has a little bit of everything. It explores all facets of love: from being very in love, to being heartbroken, telling someone you love them, you don’t love them and you miss them. Genre-wise, it has various types of pop – funk-pop, pop-rock, ballads, acoustic/organic pop. It truly shows how versatile a musical style can be.

CC: Right now, the group is promoting the new single, “No Te Necesito.” What can you tell us about that song?
DE: That song is an example of the versatility I alluded to earlier. If you play “Correr El Riesgo,” and then play “No Te Necesito,” you could easily argue that you’re listening to 2 different groups.

CC: The group has been nominated for and received several awards in Colombia, lots of positive response from the public. Now comes the Latin Grammy nomination; how do you guys feel as a group about the nomination? What were you all doing when you first found out?  Were you all together or doing your own thing?
DE: We feel that for an artist to be nominated for a Latin Grammy is one of the best things that can happen in their career. Winning one would be even greater. We see the nomination as the result of five years of work. We feel blessed and thank God because it’s taken other artists a lot longer. We’re thankful for everything that’s been happening, and we try to remain as professional as possible. We’re hoping that the good things this nomination has brought us will help us strive to be even more professional and dedicated to our work and our fans. This nomination is something that reminds us that we have to be better and better as the days go by. We were all in different areas, but were paying close attention on our computers, crossing our fingers. We were talking the day before, and I offered a prayer and said, “If it’s for us, great, if not, next year.” Coincidentally, the first category that was announced was Best New Artist, and Juanes made the announcement. He said it was an honor for him to present that category, because that was the category he won and opened the world to him. He then started listing the nominees, and eventually got to Piso 21. That’s when everything changed for me. It’s one of the happiest things I’ve heard, especially coming from him. I immediately started jumping around, half crying-half laughing, and called anyone who helped the group in any way – family, friends, etc. Then I called everyone in the group except Llane (Juan David Castaño), because he was sick. I couldn’t resist so I went to Llane’s house, woke him up and told him, because he didn’t even know. He was shocked but just as happy as I was. We went on interviews on different channels in Colombia, and then we celebrated.

CC: What’s your opinion about social media sites? Piso 21 is very active on Facebook and Twitter, sites that are growing and evolving rapidly around the world. How do you enjoy social media sites and how do you guys use it?
DE: We’re Twitter addicts. We all run our Twitter page, and use it to share our thoughts, and keep our fans updated. It’s a very efficient and easy way to reach a very large number of people. It’s a communication tool that I feel is becoming more and more important, and a tool that has to be used responsibly. I feel we all have to be careful and responsible about the information we share through social media in general. It can’t just be writing for the sake of writing; it has to mean something. It’s also made artists more approachable, which helps fans create a closer, more meaningful connection with them.

CC: Is there anything else you would like to add, about the group or album?
DE: Just to please follow us on Twitter and Facebook, and take a few minutes to listen to our music and get to know us. I know you’ll fall in love.