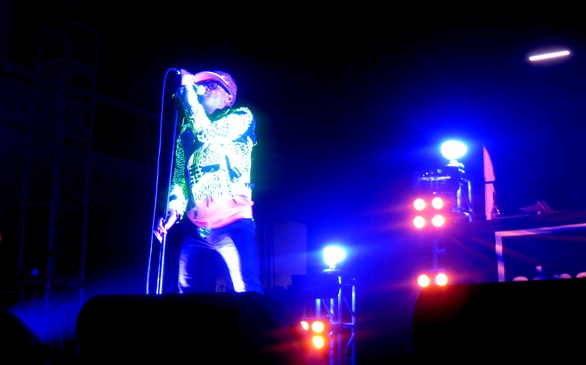 At a downtown L.A. party, SummerTramp (where brown-meets-white meets all the colors of the rainbow in swimwear), a DJ played a song that I had never heard, and I had to add it to my iTunes library. While continuing to dance, I held up my smart phone, to capture the song and identify the artist. 10 seconds later, Azari and III appeared. Everyone at the party went crazy. That experience was recreated with more smoke and flashing lights when the band came on at midnight on Nov. 8 as part of the Sónar On Tour Concert.

The preceding band, Die Antwoord (who unabashedly dissed Mother Monster, Lady Gaga in their music video, “Fatty Boom Boom”) woke up the crowd, while Azari and III took the crowd on a rave binge at the Shrine Expo Center. The vocalists Cedric Gasiada (aka Starving Yet Full) and Fritz Helder ran on the stage and sung, “I’m hungry for the power,” and their movements matched the lyrics. They were animalistic, dramatic and nuanced, an effect that was much appreciated. The worst thing that can happen going to a dance music concert is watching a dance music artist who cannot entertain.

Everyone in front of me who hadn’t been dancing to Die Antwoord rocked out with Cedric and Fritz. The other band members, Dinamo Azari and Alixander III, were behind turntables, serving the crowd the classic house beats they needed to hear.

Azari and III is an amalgamation of Dinamo’s last name and the three I’s after Alixander. The group’s goal is to create art, and it was accomplished on Saturday. They are a band with a futuresound and a fashion forward look. The energetic foursome created a wild intensity that was extended and visualized through Pfadfinderei, an internationally renowned design collective. Dolphins, cut flowers, music video clips and unrecognizable words flashed behind the band and were interrupted by rainbow-colored Emergency Broadcast System slides. The visuals served as a fifth band member, heightening the concert experience.

Into the third song, Indigo, Cedric asked the crowd, “Are you possessed?” As I looked around the mob of people, I could tell everyone was literally possessed as they danced the night away. The source of that possession is open to question, but Azari and III’s music genius is not. Nine songs later, the crowd was hungry for more.

Azari and III is hungry for your love and your love they will have, one city, one song, one remix, at a time.