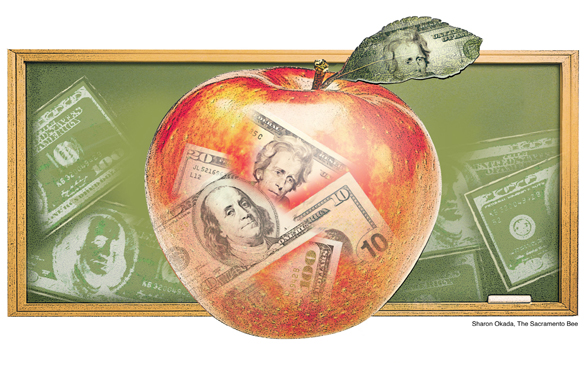 It's a natural question: Why – just a week after voters approved Proposition 30 to alleviate cuts to California schools and tuition increases at its colleges - are California State University trustees set to vote Tuesday on a new set of student fees?

CSU officials argue that the proposal to charge new fees on "super seniors," course repeaters and those who take an extra-heavy class load has nothing to do with the budget. Administrators say they've come up with the plan as a way to free up space to admit 16,000 new students and alleviate one of the most common complaints on the crowded CSU campuses: that students can't get into the classes they need to graduate.

But students and faculty are blasting the fee proposal, saying it would punish those already facing obstacles on the path toward a diploma and favor students with the ability to pay over those of modest means.

The controversy may get an extra dose of attention Tuesday, with California Gov. Jerry Brown is scheduled to attend the meeting in Long Beach where CSU trustees are supposed to vote on the plan -and where students have vowed to protest.

Brown likely will thank university students and workers for their support of Proposition 30, the ballot measure, passed by voters last week, that will generate $6 billion in annual revenue by raising the state sales tax and income taxes on top earners. He campaigned heavily on college campuses in the three weeks before the election, repeatedly making the promise that passage of the measure would freeze tuition at the University of California and roll it back at CSU. Now that the measure has passed, CSU tuition will drop by $250 in January.

Still, the third-term governor could be in an awkward spot Tuesday, taking a victory lap while students protest the proposed fee hikes.

"Prop. 30 is a good thing for education in that we're getting money," said Gregory Lewis, a student at Cal State Dominguez Hills who spoke with reporters by phone Monday. "But these fees are a totally separate entity."

University officials say the "fee modifications" up for a vote Tuesday would have been on the agenda regardless of the election's outcome. That's because the fees aren't meant to address the university's budget - they're supposed to transform the way students make their way through college.

"We're trying to change behavior so we can let more students in and get more (space in) classes for the students we already have," said CSU spokeswoman Claudia Keith.

University officials say they're hoping few students actually wind up paying the fees. Instead, they contend the threat of fees should keep students from making choices that clog up the system and make it harder for everyone to get through - such as sticking around for a sixth or seventh year of college, getting a D or F the first time taking a class, or signing up for more units than they plan to stay enrolled in.

A "course repeat" fee: Students who repeat a course would pay an extra $91 per unit. CSU officials say they could admit 4,000 new students if they cut in half the number of students repeating a class.

A "third-tier tuition" fee: Students taking 18 or more units would be charged an extra $182 for each excess unit. CSU believes this disincentive for heavy course loads would open up seats for students trying to get necessary classes

Lewis, the Dominguez Hills student, said the proposal would hurt him because he needs 18 more units to graduate. Under the plan, Lewis would have to pay $364 extra to take the 18 units in one semester, or enroll for an extra semester.

"Students who have more resources (will be) able to get into more classes," he said. "So effectively if you can pay for those classes you can graduate faster."

Cal State Fresno student Whitney Jenkins said she is a "super senior" who would have to pay dearly under the plan. But she said it's not her fault she's in her sixth year of college.

"The classes I needed in my intended major were not available and I had to take other classes to maintain a full course load and to qualify (for) financial aid and scholarships," she said.

It is just such situations that CSU is trying to reduce, said spokeswoman Claudia Keith.

"Students don't understand the objective of what we're trying to do here. It's not a punitive measure," she said. "It's a paradigm shift."

CSU has been turning away roughly 20,000 applicants a year because of a lack of space, Keith said. The fee proposal would allow many of them to get in.

The students who organized the call with reporters Monday are interns with the California Faculty Association, the union that represents CSU professors and has a contentious relationship with university management.

Union President Lillian Taiz said her organization objects to the fee-modification plan because "there are so many other reasons that are out of students' control that keep them from graduating."

"To implement fees that are punishing is the height of being unfair," she said.

Tuesday's trustees meeting is the last for Chancellor Charles Reed, who is retiring. Trustees are scheduled to approve the salary for incoming Chancellor Timothy White, who is in line to receive the same pay as Reed: a $421,500 salary plus a $30,000 supplement from CSU foundations.