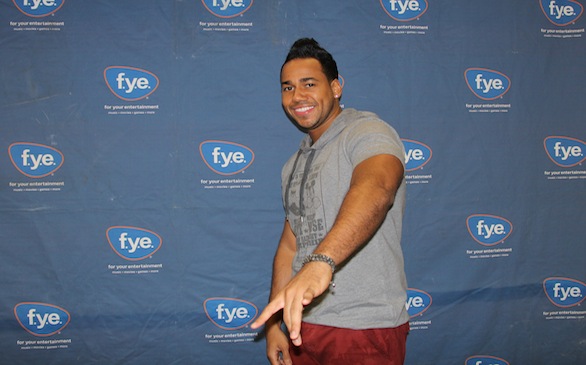 For modern bachata singer Romeo Santos, the fans always come first. Day in and day out, he's proven that to be the case throughout an already legendary music career.

It's seen him as the lead singer of bachata quartet Aventura in the past. Now, he's as a solo artist. At the age of 31, Romeo Santos - born in Bronx, New York, as Anthony Santos - continues to endorse the followership he currently has.

While on a nationwide promotional tour, Santos delivered a special autograph signing session at the f.y.e. store in Fullerton, Calif., where he signed a near 1,000 copies of his The King Stays King: Sold Out at Madison Square Garden album, DVD and/or Blu-ray disc. It occurred Saturday, Nov. 10.

"I feel very good, very good. I'm happy to be here," said a rather relaxed Santos. "Every time I'm around here I spend it marvelous. Just like always, I'm really happy."

Santos is one of the country's top selling artist. With this latest release, he solidifies his career in the music industry as a singer, songwriter who can only go up from here.

"We did this production [The King Stays King] so that people could witness the experience of that night," said Santos. "It was a total of three sold out concerts at the Madison Square Garden. We know that many fans couldn't attend perhaps because they live in Los Angeles, the Dominican Republic or Puerto Rico. Now, this DVD allows them to perceive and be a part of such a magical night."

In the late 1990s and early 2000s, Santos - while with Aventura - became an essentially prime figure in popularizing the Dominican music genre of bachata. This particular style sports a tropical beat with romantic lyrics, and it's often classified as an extremely sensual niche. It could be due to the sexual dance withheld within the rhythm.

However, Santos doesn't close the opportunity of teaming up with regional Mexican musicians. "Everything depends on the moment. I never plan these things. They are things that happen organically. Obviously, I respect the genre a lot. I have many Mexican fans and if they demand it from me, then why not?"

After making the turn to an individual act, Santos debuted with Formula, Vol. 1 in 2011. The album received massive recognition worldwide, particularly in Latin American and the U.S.

Santos confessed he's began working on his next album.