Red Dawn: A Successful Re-Imagining of the '84 Original 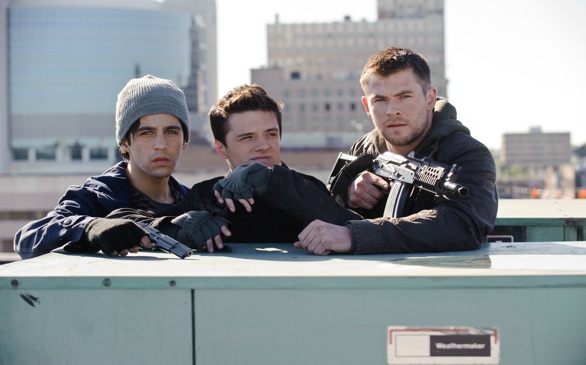 Chris Hemsworth carries the cast as the leader in this action-packed thriller.
(Credit: epk.tv)

It seems with Hollywood nowadays, the endless march of re-hash movies has picked up its pace in recent years. With an economy that doesn’t allow for consumers to spend money on movie tickets, there are myriad reasons for a studio to consider a re-hash as a safe bet for profitability. Unfortunately for viewers, these re-hashes often starve us of original content and can spoil films that we had otherwise considered sacred.

So naturally, when viewers got wind of the up coming remake of the 1984 John Milius thriller Red Dawn, the idea was met with apprehension. Yet despite any hype surrounding a potential sullying of the original, this November’s release can stand on its own as a movie that will keep people talking.

It's a nostalgic remake of the ‘80s classic that serves to re-ignite a sense of American vulnerability that we haven't felt since the Cold War. Set in today’s volatile geopolitical climate, it replaces the premise of a Soviet takeover of the Pacific Northwest with that of a North Korean invasion, aided by Russians. The visual of North Korean troops parachuting into suburban communities is not only terrifying, but it also seems alarmingly plausible.

The idea of a foreign invasion on American soil is backed up by a loose back-story that is sufficient, even though it may not be bulletproof. In all reality, the likelihood of such an invasion, especially by North Korea is still far fetched, but that is the beauty of this film: It makes you believe that this can actually happen.

For the producers, the idea was not necessarily to make some sort of political commentary. Rather, the politics of this film are merely the backdrop.

In a recent interview with Campus Circle, director Dan Bradley explained, “The thing that was most important to me was a story about these kids fighting back and figuring out how to deal with this situation. So for me, personally, the specific identity of the invaders wasn’t a driving force…the movie is not political.”

For Bradley, the making of Red Dawn was a unique experience. Having established his career in the development of stunts and action sequences, Bradley’s specialty has always been second unit direction. His credits include blockbusters such as Spider Man, Independence Day and Mission Impossible: Ghost Protocol. For the making of Red Dawn, Bradley was allowed the chance to step out from his typical niche and act as the film’s director.

When initially taking him on, producers Tripp Vinson and Beau Flynn both understood that this film would be a break from the norm when working with Bradley. All said and done, they were pleasantly surprised by his versatility.

“We knew that Dan would bring the ability to shoot a great movie and do great practical action sequences,” said Flynn. “What was really surprising was his development skills and his ability to come in and understand story.”

For Bradley, this opportunity was more than just another gig. With added concerns of storyline, character arcs and the building of relationships, this was his first opportunity to exercise creative control over the entire film, rather than just the action sequences.

He referred to this experience as, “an opportunity I had been working for my entire professional career.”

He added, “I put myself under a lot of pressure.”

For Bradley, the overall goal of his direction was very specific.

“My own personal mission on the movie was that…when a character got injured or was killed, I wanted it to mean something,” he said. “I wanted people to feel something in the audience.”

From the moment the invasion begins, Red Dawn takes off with a compelling storyline and a visual presentation that knocks you back in your seat. By the end of the film, you have gotten to know these characters. Particularly noticeable are the performances from leads Chris Hemsworth, Josh Peck and Adrianne Palicki.

Hemsworth is adding to his credibility as a rising action star with a cool composure and a strong sense of leadership that really carries the rest of the cast. Palicki and Peck on the other hand, present performances of characters that become completely developed by the end of the film. It’s an impressive feat, accomplished by actors that we will no doubt be seeing more of down the line.

Despite its minor flaws, Red Dawn is an entertaining film with a fascinating concept and action sequences that will rattle your bones. With due homage to the original, this current version of Red Dawn is very much its own thing.

Re-imagined for the present day and injected with quality drama and development, Bradley, Flynn and Vinson have indeed succeeded in creating something that is both multi-faceted and entertaining. But more than anything, it’s well worth a watch.