Fonseca's Music is a Reflection of Himself 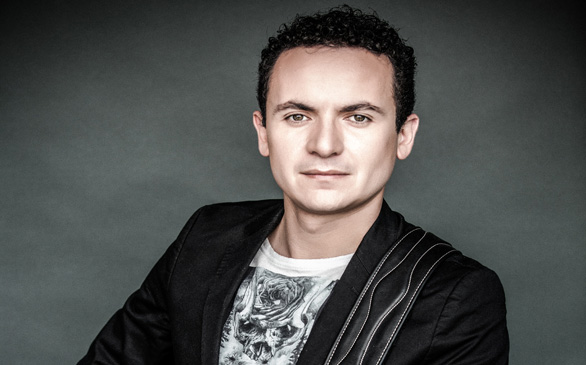 Fonseca, 33, is a singer-songwriter of Colombia.

It doesn’t happen often. But when it does, it’s here to stay forever.

From time to time, Latin America cultivates a rather unique human being who not only discovers a talent, but an enthralling passion for music. And this passion remains prominently related to the person’s roots.

That’s where acclaimed singer, songwriter and musician Fonseca comes into the picture. Fonseca, a Colombian residing in Miami, has managed to retain his country’s traditional and popular styles of music, including the folk rhythms of cumbia and vallenato, within his career’s catalogue.

His most recent album release, Ilusión (Hope), sports these rhythms – particularly with the song “Historia De Amor” (Love Story), a track that’s romantic and slightly up-tempo. The vallenato, a joyful, accordion-accented coastal music type in Colombia, is prominent within it.

“Vallenato is something I love,” said Fonseca. “For me, the accordion, and vallenato in general, is something that I feel I’ll always want to incorporate in my work. I’ve always loved it.”

Ilusión consists of 15 total songs, including two versions of “Eres Mi Sueño” (You’re My Dream), which he created specially for his two-year-old daughter, Paz Fonseca Posada.

“‘Eres Mi Sueño’” is a song I wrote for my daughter,” said Fonseca. “It’s a declaration of love, but also liberty. In Colombia there’s a saying, which states that ‘sons and daughters are on loan to us,’ and so that’s where the lyric, ‘Yo no soy tu dueño, solo quiero abrazarte,’ [I don’t own you, I just want to embrace you] comes from.”

With “Eres Mi Sueño,” Fonseca fuses an urban-electronic side of merengue.

Interestingly enough, the 33-year-old sporadically blends tunes supported by other genre rhythms, such as pop, mariachi, and soft rock. “That blend of several genres in one album is one of the things I like the most about it because it demonstrates what I am, and what I like about music,” confessed Fonseca.

“As time goes on, I feel more and more artists will be part of this list of people who’ve influenced my music,” admitted Fonseca. He added that they’ve all inspired him in some shape, way or form.

For Fonseca, music just happens naturally with no outline or concept behind any record or melody. In fact, he mentioned that Ilusión, produced in New York, Miami and his birthplace of Bogotá, wasn’t a project he planned.

“This album is a mixture of a lot of different things. Not only feelings and life experiences, but also musically, it’s a very eclectic sound based on different musical genres,” he said. “It wasn’t something I planned. Whenever I’m making an album or writing a song, I think about the music I would like to hear, and I let things happen naturally.”

Above all of the success and fame, Fonseca – who studied music at two prestigious universities in Bogotá – deeply enjoys spending time with his family (wife and daughter) and friends. In terms of extracurricular activities, he likes playing soccer and bike riding.

On top of that, he admitted that he never saw himself practicing another profession other than music.

“Never. Never in my life have I imagined doing anything else besides music. Fortunately, I have never found myself considering anything else,” said Fonseca. “In our line of work, one always goes through hard times, especially in the beginning, when trying to find support, and a label that wants to work with you. But again, I’ve never thought of myself doing anything else.”

But Fonseca’s triumph in the industry hasn’t gone unnoticed by his peers, who love sharing the stage with the lively Colombian. In late September, Fonseca embarked on a Central American tour with pop singer Chayanne and salsa singer Marc Anthony – an experience Fonseca classified as phenomenal.

Then, in late October, Fonseca made yet another prolific journey. Only this time, it included one of the most known salsa legends of all time in Willie Colón. Together, they toured and delivered their tropical styles to the audience in Australia.

To date, Fonseca continues to allow his music to genuinely flow by nature. After all, his music is a mirror image of himself.

“For me, music has always been a reflection of me and what I’m living through at that moment,” he said.