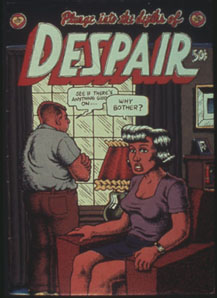 Untitled Document Quick. What’s one of the most popular and influential forms of mass media in the 20th century? Obvious answers include movies, television and the back of cereal boxes. But the answer MOCA’s looking for is comics – because, let’s be honest, you don’t see any back window decals of Lucy Arnaz peeing on a Ford. No, it’s comic icon Calvin devilishly pissing on that icon, which is just one of the reasons MOCA considers comic strips and books among the most influential mass media of the last century.

Masters of American Comics brings that Keep On Truckin’ guy out from his subjugation on mud flaps and into the realm of the muses. MOCA’s exhibit examines 15 key American artists who were instrumental in the establishment of comics as an art form. The exhibit features drawings, proofs, comics and vintage funny pages from some of the medium’s most acclaimed artists, including Winsor McCay ("Little Nemo"), Peanuts’ Charles Schulz, comic godfathers Will Eisner and Art Spiegelman, Mad’s Harvey Kurtzman, R. Crumb and Chris Ware – author of the most depressing tome this writer’s ever read, Jimmy Corrigan: The Smartest Kid On Earth.

Sharing the exhibition with the Hammer Museum, Masters of American Comics will give you the opportunity to convince your girlfriend that you’re not just reading stupid "picture books," but works of artistic genius.