The Faint Stop Through L.A. in Return from Hiatus 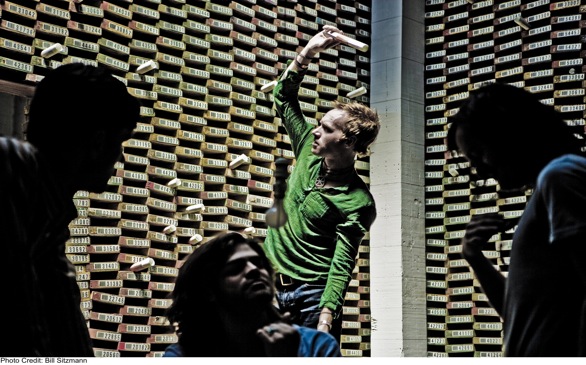 The Faint will perform new and old music while on tour.
(Credit: Bill Sitzmann)

More than two years have passed since The Faint stepped on a tour bus, and nine more have elapsed since it released the album that would help put Omaha’s burgeoning indie rock scene on the map.

But that’s not what has the synth-punk quartet reuniting for 26 shows across North America, including two in the greater Los Angeles area this month.

“We didn’t get back together to play old music,” frontman Todd Fink said one afternoon while taking a break from a practice session in the band’s studio.

Although The Faint has promised to play all of 2001’s Danse Macabre in support of the record’s remastered edition, Fink and his band mates are also debuting new material off a 12-inch vinyl that will only be sold at their shows.

“We love playing the songs that we wrote, but our interest coming off the hiatus was to make new music,” he continued. “So in order for that to happen, we have to go out on tour. And we want to go out on tour.”

So do the band’s fans.

After closing out the second day of FYF Fest in front of a packed crowd, The Faint will return to L.A. on Nov. 18 for a night at the Fonda Theatre before stopping at The Glass House in Pomona three days later.

“L.A. has always been one of our favorite places to play,” Fink confessed. “As far as actual crowds and venues go, I don’t think there’s a better place.”

The Faint, of course, has been all the rage back home ever since it signed onto Saddle Creek Records, the Omaha-based label that also represents homegrown mainstays such as Cursive and Bright Eyes. In fact, Conor Oberst was an original member of the band before leaving to start Bright Eyes.

A lot, though, has changed for The Faint since those early days.

Not only has the band featured different guitarists and bassists over time, but it also left Saddle Creek Records in 2008 to launch its own label, blank.wav, for its fifth studio effort. While Fasciinatiion didn’t amaze quite as many listeners as Blank-Wave Arcade and Danse Macabre, it still received positive reviews across the board.

However, after almost two years of touring on behalf of the album, The Faint needed to take some time off.

“We had done the cycle so many times,” said Fink, who doubles on vocals and keyboards. “We needed a break from it. Instead of making a record when we didn’t really want to, which doesn’t make any sense to do, we just stopped.”

So Fink, drummer Clark Baechle and keyboardist Jacob Thiele founded Depressed Buttons as a way to explore their electronic music curiosities. DJing at various clubs and venues around the country, the project quickly opened the trio’s eyes to a whole different side of music.

“I think that it taught us about the things that we were too close to,” said Fink. “Listening to more club-oriented music and learning how to produce electronic music ourselves, we learned a lot about how to make music sound good in a club. That’s probably part of what turned us on to a more minimalistic approach.”

And that’s the direction Fink has been pushing the band toward even before it decided to shut things down for a while.

“We got a little too caught up in needing to put too many parts in songs and needing to fit everything we thought of into the music,” Fink explained. “It came at the expense of a more rolling quality of music, that force which propels a song. Now I think we’re more interested in using that trickery in ways that make each part ask for the next.”

Perfecting that balance will take time for The Faint, and Fink understands that. But he doesn’t think they’re that far from finding it either.

“We want to see how far we can go each way,” Fink said. “Each new thing that you make, you learn from things that you’ve done before. We’re stripping it back and just trying to celebrate the things we do have in there instead of trying to mix in a million things that you could listen to or could notice the next time around. I think we kind of have that going on our new stuff.”

The Faint will perform at the Fonda Theatre on Nov. 18.

Special Features
Wolfgang Van Halen on his Whisky a Go Go 'homecoming,' a year after his father's death
949 views

Special Features
These are the songs of summer 2021: A playlist for your easy, breezy season
536 views
bid=||