(The Weinstein Co.)
By Nataly Chavez 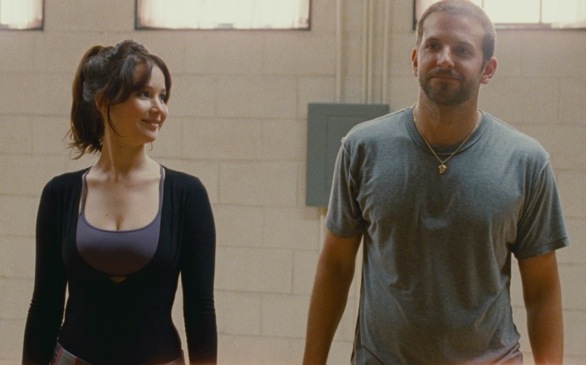 It all comes down to Excelsior. Recently released from a mental institution, Pat Solatano (Bradley Cooper) moves back home as a seemingly sane man trying to win back his ex-wife. Yet, almost as he rejoins society, he fails to hear the voice of reality from his parents, as played by Robert De Niro and Jacki Weaver.

Convinced that his newly found embrace of Excelsior (which is finding something positive in everything) and his rigorous exercise plan has helped him control his bipolar disorder, Pat blindingly believes it’s enough to get back his old life.

Although despondent about Pat’s decision not to take his medication, his parents are nothing but supportive. For his father, it is finally the chance to spend time with his son watching their beloved Philadelphia Eagles team. However, Pat’s lack of verbal and physical restraint begins to break through to the point at which he must go back on his meds.

When he meets Tiffany (Jennifer Lawrence) things take a turn for the uncontrollable and wonderfully weird. On top of the electric chemistry between them, they soon find out they have one thing in common: They’re both a crazy mess.

By far one of the best performances from Cooper, he brings a nice blend of humanness to his brusque character. His stubbornness and no-bullshit approach is refreshing and above all else, hilarious. And although he sometimes seems like an overgrown child, Pat is a very tortured human being.  Writer/director David O. Russell’s (The Fighter, I Heart Huckabess) brilliant dialogue allows the film to flow as Pat and Tiffany bump heads at every turn.

Lawrence demonstrates an incredible maturity in her acting ability (outside of the Hunger Games realm), which adds a fascinating depth to her character. Mysterious and completely fearless, Tiffany isn’t afraid to tell Pat how it is or put her feelings on the line. Though not clear what her intentions are at first and at times coming across as just plain psycho, Pat and Tiffany begin to form a peculiar bond.

While entertaining and reflective of having second chances, the film drifts into unnecessary territory as Robert De Niro’s character becomes temporarily obsessed with betting on his favorite team, only momentarily touching upon his guilt for not being more present in Pat’s childhood. In spite of that, De Niro gives a memorable performance in a supporting role.

A film to surely win audiences over, Silver Linings Playbook is a dark but uplifting flick that will have you laughing. Movie magic at its best, the true gem is the togetherness of Cooper and Lawrence, who will be working together once more in the upcoming film, Serena.