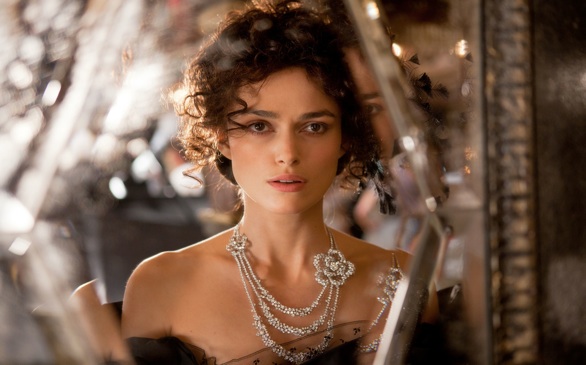 Keira Knightley is back in Anna Karenina.
(Credit: Laurie Sparham)

Film, like literature, is a combination of parts. Characters, themes, setting and tone are vital aspects of both mediums. However, literature relies solely on the writer to develop the story and to draw the reader into a loving embrace of words. With film, it is a bit more complicated. The screenwriter builds the skeleton of the ship, but the director must lead the vessel through the stormy waters of casting, filming and editing.

In this voyage of Anna Karenina, Joe Wright (Pride and Prejudice, Atonement) assembles his usual crew to man the deck, except for one major play. New to his team is acclaimed playwright Tom Stoppard, who is best known for his existential play “Rosencrantz and Guildenstern are Dead” as well as for co-writing the 1998 film Shakespeare in Love. What Stoppard brings to the feature film adaptation of Leo Tolstoy’s classic novel, Anna Karenina, is his love of abstract storytelling mingled with the ironically simplistic themes of love, family and honor.?

If you haven’t read the novel, the story is this: Anna (Keira Knightley, another of Wright’s common conspirators) is a young aristocrat, married to a powerful and established government official, Alexei Karenin (Jude Law).

They live with their son in St. Petersburg, maintaining the lavish lifestyle befitting the social ranking granted to them by the society of 1874 Imperial Russia. Anna’s brother (Matthew Macfadyen) lives in Moscow with his loyal wife Dolly (Kelly Macdonald) and their ever-growing brood. However, he has a wandering eye, which he too often abides by, causing a scandal in the family.

Anna goes to Moscow to bring peace and forgiveness to Dolly’s heart, but it is her heart that is intrigued by a charming cavalry officer, Count Vronsky (Aaron Taylor-Johnson). Though she avoids his advances, love overcomes both parties, and Anna finds herself in a full-blown affair.

Anna is spiraling out of control in an affair she cannot handle. Or is it society that can’t handle her affair?

Unlike his past period pieces that were relatively “by the book,” this film adaptation has been theatrical-ized, confining the characters to the stage and backstage and interweaving story with story with story. This technique is a bit jarring at first, leaving viewers yearning for the stylized shots of the countryside and elaborate interior sets. We are given these images eventually, possibly making it that much sweeter when we are.

This choice enables choreographer Sidi Larbi Cherkaoui to masterfully play with scenes and characters, and the film takes on the rhythm of an intricate dance, slow at first, but tantalizing throughout. And there can’t be dance without Dario Marianelli’s moving score, which (you can quote me) will win an Oscar come February.

Despite its unconventional use of storytelling, Anna Karenina is a film adaptation that will draw you in, have its way with you and, most likely, change you for the better.

Movie Reviews
A brutal coming-of-age story about the eradication of feeling
1,095 views

Movie Reviews
'Nobody' is a lean, mean and brutish dadsploitation flick
335 views

Movie Reviews
In ‘Minari,’ the American dream is held up to the light and examined for cracks
619 views