Mike D’Antoni Confident He Can Bring Championship to Laker Land 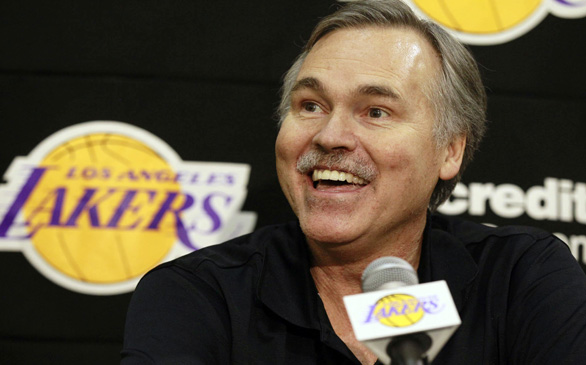 EL SEGUNDO, Calif. --- Phil Jackson nor his crouches were going to get in the way of Mike D’Antoni’s first official Lakers practice. It was not a dictating practice for D’Antoni, but he observed the team out on the floor and feels confident the Lakers are capable of winning an NBA Championship this season.

It’s clear that the Lakers have all the starting rolls necessary to win a championship. The expectations are high for the squad this season with a roster full of talent and D’Antoni feels confident with the players on his team.

“I’ve coached Steve [Nash]. I know how much fun that is, so I know how much fun I am going to have. I’ve coached Kobe [Bryant] and I’ve coached Dwight [Howard]. I know the possibilities that we have," said D'Antoni. Most of the time you don’t want to be in a situation where your expectations are too high and you cannot get them up there, but that’s not the case here. Our expectations are to win a championship and we have the team and players to do that.”

With only eight games thus far in the season, along with the dismissal of Mike Brown, there has been speculation whether D’Antoni can create team unity within his coaching system and improving the defensive strategy.

“The process should not be long. It shouldn’t be tedious at all. And the good thing about it is defensively we should be a bear,” he said. He continued by addressing the defensive force in Howard. “He can absolutely control the game on both ends of the floor. He’s the dominant center in the league. There’s nobody else like him [and] right now he’s playing at 75-80 percent of what he can do.”

D’Antoni has many expectations for Nash and Steve Blake to utilize Howard well in the offense. He admitted, “Dwight’s going to be good. Our offensive philosophy; we just have a rhythm to it. Open the floor; make things as easy as we can with some great players. You do that, things flow. Nothing is set and stone. I don’t know exactly how the team will look, but you keep working through it. The talent level is off the charts. Now it’s our job and Steve’s job to get everybody on the same page and for everyone to understand that this is how we are going to win a championship.”

After practice, Bryant, Howard, Metta World Peace, and Pau Gasol had mutual feelings about D’Antoni by stating that they were excited for him to be the head coach as well as acknowledging the great things he’s done through his career in the NBA.

D’Antoni won’t be coaching the Lakers Friday against one of his former teams, the Phoenix Suns. However, he said he will be ready to go on Sunday versus the Houston Rockets at 6:30 p.m.