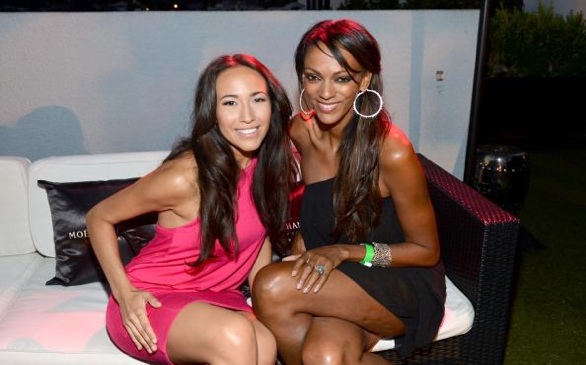 Imagine you’re balancing working a job to pay the bills and then you get the call from your agent with the awesome news that you booked your first major acting role. The excitement dies down when you get another call from the agent saying they made changes to the script and would like for you to do a topless scene, which is so not what you signed up for.

Or imagine you’re walking down the street, and a complete stranger comes up to you and asks, “Didn’t you used to be famous?”

Marisa Quinn and Judith Shekoni, two actresses who appear in the film Twilight Saga: Breaking Dawn Part 2 (as Huilen and Zafrina) have gone through their share of ups and downs. But now they can celebrate the fact that they are a part of one of the most anticipated movies of the year.

“I got a role on the longest running show in the U.K. (“EastEnders”), and it changed my life,” she said.

Even though the road that both Quinn and Shekoni took to get to this point differs, they both admit it was well worth it.

Quinn left her family tradition of cheerleading to follow her dreams.

“I’m from Texas, and I grew up as a cheerleader.  That’s what you do…everyone out there is into cheerleading and sports,” she said.

Laughing, Quinn recalled that when she quit the cheerleading team her senior year of high school and joined a theater troupe, everyone thought she had lost her mind.

Meanwhile, Shekoni went from “EastEnders” to booking a ‘little’ show called the “King of Queens.”  But the road to success for this actress wasn’t easy either.

“There were a couple of years…where it was hard to book something,” said Shekoni.

Quinn was in the same boat as Shekoni, but there’s a bit of a twist to this story. As a traveling spokesmodel, Quinn was making great money and able to pay her bills, but she wasn’t able to audition, which was why she had moved out to L.A. after college in the first place.

“It was scary a decision to quit the job but it was a sign,” said Quinn. “As soon as I quit, I landed the audition for Twilight”.

She admitted that as an actor, you have to go out and also create opportunities for yourself and not always sit around for the next audition.

Monarch Media Productions is a production company that Quinn started with a few of her colleagues to challenge stereotypes and promote diversity. Their first film, Sweet Mary & Jane, just screened at the San Diego Film Festival.

On the other hand, Shekoni is going to Nigeria to shoot the African version of Eat, Pray, Love. With this project, she gets to kill two birds with one stone: combine her passions of acting and traveling.

As for Twilight…well this article can’t end without some words from these actresses about their experience on the set. Shekoni seems to still be in awe of the life changing experience.

Quinn was blown away by how humble everyone on set was—from the crew to world famous Robert Pattinson and Kristen Stewart.

“Rob and Kristen were so down to Earth and humble,” she said. “The entire set was cool, and the people were happy.  The main stars set a great example for everyone.”

“It’s not about fame…I’m an actress.,” said Shekoni. “I’ll study and work hard.  Proof will be in the pudding.”

And did Quinn choose to do the topless scene so that she could hold on to a lead role?

“I turned down the topless scene, and my agent thought I was crazy because this meant they would give the role to another actress,” she said.

But guess what? The production team behind the movie still wanted Quinn despite the fact she would not go topless; she went on to act in the lead role.

If there’s anything that these two actresses have learned, it’s the important lessons of not giving up, not giving in and taking the time to laugh and learn with the various situations that being an actress in Hollywood can put one through. Despite the doubts and fears these cool gals have made big leaps.

They can celebrate this victory by having the last laugh.