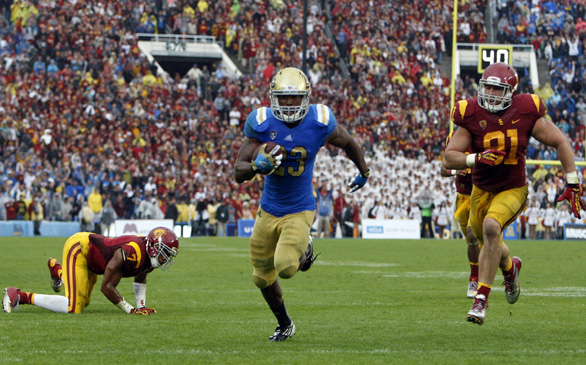 His arms outstretched, UCLA linebacker Eric Kendricks roared into the California sky, the sound silenced by the deafening exhale of a Rose Bowl home crowd that had yearned so long for this moment.

The crescendo began just before Kendricks' cry, as much-maligned senior cornerback Sheldon Price dived in front of USC's field-goal attempt and blocked the Trojans' last chance at a comeback. It sealed the 38-28 Bruins victory, their first in the crosstown rivalry since 2006 and just the second victory in the past 14 years of the rivalry.

USC would take the field on offense one more time, only to watch its star quarterback and former Heisman frontrunner Matt Barkley be knocked out of the game, an offense deflated by earlier mistakes. As the seconds ticked off the clock, Kendricks and his teammates couldn't help but look around and take it all in.

"It was euphoric," Kendricks said after the game, still beaming. "It was just joy, man. We beat SC. It's a rival, it's special, this our ninth game we've won. We all knew we could do it, but it's just special taking over L.A. again."

In Coach Jim Mora's first year, the Bruins have turned around a 6-8 team - a squad that had been embarrassed by these same Trojans the year before, 50-0 - and fielded a division title winner. They also earned a spot in the Pac-12 Championship Game against either Stanford or Oregon.

For the first time since former linebacker Eric McNeal tipped a John David Booty pass at the line of scrimmage in 2006 - sealing a victory that had shocked the nation - the Bruins could claim they were the better team.

Mora could barely articulate his group's emotion afterwards. The release of a group that had not beaten its archrival materialized in the locker room after the Bruins left the field. It was like nothing Mora had ever seen in his time in the NFL.

"To be a part of that with them is really special," Mora said in a news conference that was otherwise even keel, focused already on next week's game against Stanford.

But for the majority of the game, Mora remained concerned, he said. He, better than anyone, understood how dynamic USC's offense truly was _ something he discussed time and time again in the past week.

Like clockwork though, just as the Trojans would push, UCLA seemed to push back, coming up with the game-changing play they needed whenever necessary.

That impeccable timing began on the first play of the game, as Barkley dropped back looking for wideout Marqise Lee, only to throw the game's first pass into the hands of senior cornerback Aaron Hester. It would take Brett Hundley and the Bruins offense just five plays to score.

"When you kick off to a team like USC on that first drive," Mora said, "you're hopeful you can get a three-and-out at least, you're hopeful they don't take the ball and run it right down your throat and ruin that emotion you came out of the tunnel with.

"But to get an interception and turn it into points, that's big. It gives you confidence. ... It makes them believe they can play with these guys."

From there, the Bruins' confidence shone all game long through the play of Hundley - a passer with just 10 games of experience, playing the most important game of his career. He carefully sliced and diced the Trojans' defense from start to finish, completing 22-of-30 passes for 234 yards and a touchdown, while adding two more touchdowns on the ground. Before Barkley had completed his first pass, Hundley had already gone 10-for-10.

The Bruins would take a 24-0 lead before USC clawed its way back, stealing the momentum before the half. But as rained soaked the Rose Bowl in the second half, after a defensive touchdown on a fumbled snap brought USC within four, 24-20, UCLA's big plays began to truly change the landscape of the game. Kendricks blocked a punt in UCLA territory and later delivered a crushing interception to Barkley, the 15th of the year for the Trojans' signal caller.

Then, with a little more than four minutes remaining, running back Jonathan Franklin, who had grown up with a undeniable USC influence surrounding him, broke free and sprinted toward the right side of the south end zone, scoring a touchdown that would give the Bruins enough for the win.

"When the season started," Hundley said, "obviously nobody thought we were going to be doing what we're doing now. We all knew deep down inside that we could do it."

As the rain continued to pour, UCLA's bright future had come more into focus - a significant difference from their 7-4 crosstown rivals, who cemented on Saturday that 2012 would likely be remembered most for its disastrous collapse in the face of expectations. The Bruins were heading to the Pac-12 championship game, a nine-game winner, and the king of Los Angeles college football - at least for the time being.

"Finally," Kendricks said, still smiling. "Finally, we get a little respect, I feel like everyone kind of took a step back and can respect us a little more. I think we earned that today."