Galaxy Loses to Sounders, 2-1, But Advances to MLS Championship Game 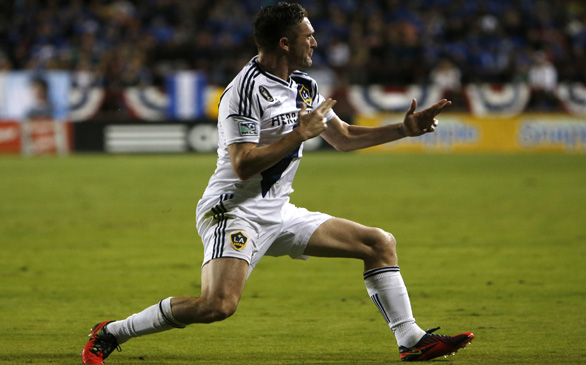 When the final whistle sounded on Major League Soccer's Western Conference finals Sunday, it was hard to tell the victors from the vanquished.

On one side of the field the Seattle Sounders, 2-1 winners, saw their livid captain Osvaldo Alonso charge the officials, earning a red card. On the other side, Los Angeles Galaxy players embraced, pumped their fists and generally went wild, celebrating a title and collecting a trophy they won despite losing.

Welcome to the MLS postseason, where things aren't always what they seem. Because despite being outplayed, outhustled and outclassed on a rainy, bone-chilling night at CenturyLink Field, the Galaxy is going on to the league championship game and the Sounders are going home, Seattle having lost the two-game series on aggregate goals, 4-2.

"We didn't play particularly well, there's no question about that," said coach Bruce Arena, whose team won the first leg of the playoff, 3-0. "But we did what we came here to do, advance into the MLS Cup finals. We won this competition and deserve to move forward."

Forward being a Dec. 1 championship game against the Houston Dynamo, the team the Galaxy beat in last year's MLS Cup final at the Home Depot Center in Carson, Calif. And because Arena's team had a better regular-season record than Houston, the Galaxy will again play host to the title game.

"The same teams in our stadium again. So we'll take it," striker Robbie Keane said. "The most important thing is we're in the final."

And the guy who played the most important part in getting the Galaxy there was Keane, whose penalty-kick goal in the 68th minute - his fifth score in three games - deflated an urgent Seattle attack and silenced a crowd of 44,575. What's more, it was the handball call against Adam Johansson to set up the penalty kick that had the Sounders livid afterward.

Needing to beat the Galaxy by three goals just to force overtime, the Sounders came out with an urgency that went unmatched by the Galaxy who, playing without injured captain Landon Donovan, chased the game all night. Seattle's energy was rewarded in the 12th minute when Eddie Johnson took a long through ball from Zach Scott up the left wing and, with defender Omar Gonzalez hanging on, lined a left-footed shot from the middle of the box into the lower left corner.

Johnson had beaten goalkeeper Josh Saunders a minute earlier, taking a pass from Christian Tiffert in the box and one-timing a shot into the center of the net but that score was disallowed by an offside call.

The Sounders didn't let up, though, and when Scott scored on a diving header 12 minutes into the second half the momentum was clearly with Seattle.

Keane stopped that with a nifty play nine minutes later, taking the ball up the left side of the penalty area despite some close marking from Johansson, who eventually pinned Keane against the end line.

With nowhere to go, Keane tried to send a wrong-footed cross toward the goal but the ball struck the defender in the left hand instead, earning a penalty call from referee Mark Geiger, a penalty Keane converted.

"You can't try to get a penalty in that situation. I was just trying to get the ball across and the referee gave a penalty," Keane said. "So lucky for us. Certainly they were the better team tonight. There's no question about that.

"But at the end of the day we're in the final, so that's all that matters."