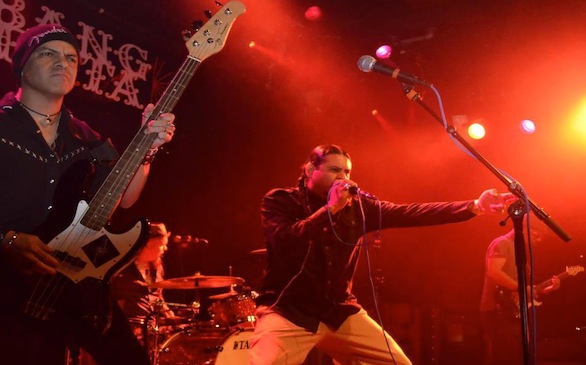 Campus Circle: How did you guys decide to pursue music as a career?

JC: My family probably had something to do with it. You just kind of know. We’ve both been doing this for a while, before we even met each other. For me, it’s a passion. It’s part of who you are.

DE: For me, it was my father. I was raised with music. Also, when I was nine years old, I heard rap, and just had an epiphany that that’s what I was going to do. It just clicked in my mind.  When I heard somebody rhyme on a record, I knew that’s what I wanted to do. We’ve all been doing this for a long time, we all had our own careers before getting together, but when we all started doing music together, we just had that feeling of rejuvenation. To be able to do something new and fresh, it just felt good, so we just ran with it.

CC: Bang Data havs a new album that’s now available, titled La Sopa. How was the title created? Is there a meaning or message behind La Sopa?

DE: Well, I love soup. It’s one of my favorite foods. I eat it like six times a week. People would always ask us what genre our music was, and what style. We kept trying to decide what to call the album, and one day we just decided to call it La Sopa because it’s a soup. It’s a mixture of everything like vegetables from all over the world, spices and flavors from all over the world. You can put anything in a soup. Most cultures have soup. It’s like a comfort food; it’s a mixture of all kinds of styles, and the fact that we’re Latinos adds a bit of flavor.

CC: Where does the inspiration come from when you’re formulating your songs?

DE: For me, it’s about what I go through in my life. I was going through a lot when I first hooked up with Caipo, and that basically became the album for me. A lot of times, people will ask me about the songs, and what they mean but they’re so deep sometimes I can’t even explain it. I feel that, in the end, we try to collaborate. If I have an idea that I can build on, he’ll give me an idea, and he then listens to my feedback. We’ve reached a point where we feel everything is just right. I may do something that’s not perfect and he’ll make suggestions. I’m open to it. When we met, I was open to change, and expand as a musician. This is what I live for.

JC: It comes from everyday life, and things we go through. I wanted to make an album that had substance and what was honest to my life – something the people could relate to.

CC: What can you tell us about the song “Curandero”?

DE: Caipo had an idea with the horns, and what the beat was going to sound like. I just came into the studio and just sat there writing. Often, when I’m listening to a musical melody, I then come up with lyrics that fit the melody. For some reason, the word curandero came out. Once that comes out, it becomes the basis of the track. Once you get that basic idea, everything else just flows around it. With “Curandero,” it was really the flutes that made me come up with that word…It just became a song about curing people with music, about calling out to our ancestors to cure us with music.

CC: Where have your musical influences come from?

JC: I think we have very diverse musical influences. The first songs I remember listening to when I was a kid were by Stevie Wonder. Then I was all about rock. Later on, I went through a stage where there’s the whole rock element as well. I liked The Police a lot. I also like Brazilian music – anything from Brazil. Sublime as well. Really I’ve just absorbed things by playing different music. Also, I feel we’re still being influenced to this day.

DE: I was raised in the hip-hop culture since I was eight years old. I remember writing raps. I also grew up with Michael Jackson and Stevie Wonder. I just love music, period. My first influence, however, was my father. Before I even knew what music was, I was singing and playing the organ, and singing along with his guitar and things like that. He’s my major influence. He was the one who raised me musically but then we also have Public Enemy and KRS-1. I just love being part of a world where music has its own voice. I just want to be able to be in the same room with any artist and have them say we’re doing our thing. Good music is good music, regardless of genre. When you hear something that’s good, you just know.

CC: What’s the number one thing you want to show the public so they can know about Bang Data?

JC: We just want to get out there, reach more cities. Our mission right now is to get our music out to everyone, and perform live.

DE: Also, that we’re in touch with our community and our ancestors. For me, it’s deeper than music. It’s a spiritual thing. I want people to know that when they come see a show, you’ll feel love and you’ll feel good about yourself.