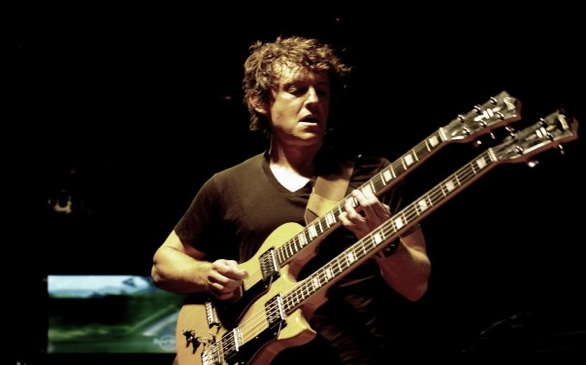 The duo El Ten Eleven has as much energy as a five-piece band.
(Credit: Facebook.com/elteneleven)

Last week, local act El Ten Eleven performed to a packed house at the Echo in Los Angeles. That night the band ‘wowed’ the crowd with its wide array of pedals, drum sounds and commanding vibe.

Hayden Scott, now the drummer in the famed Awolnation, told me El Ten Eleven was one to watch for. Apparently, he recorded with them in the past and insisted that I check them out if I ever had the chance. When I finally got tickets to see their show, I was excited to see that people were lining up early outside the venue.

By the time the band took the stage at approximately 11 p.m., the place was packed and people were murmuring to each other about its big, raging and heavy sound. Needless to say, I was intrigued. The surprise came when the band came onstage -- I realized this band was actually a duo!

Neatly organized in front of guitar/bass double neck Kristian Dunn were at least a dozen pedals that would later create a variety of sounds that assimilated any instrument he pleased. Meanwhile, Tim Fogarty, drums/synthesizer, beat the skins with impeccable timing; his onstage craze was relentless.

The post-punk outfit, which took its name from an airplane (Lockheed L-111), is known for merging guitar/bass, heavy looping and effects pedals over electric drumming. At the Echo, the duo sounded like Sigur Ros and Ratatat on speed with lots of bourbon in their system. ? ?Without laptops or a sequencer, the pair generates a powerful sound that would make you think they were a five-piece. Without lyrics, the duo conveys its emotions utilizing a torrent of bass, drums and other sounds with complex melodies.

During its dance-fueled performance, El Ten Eleven offered music from various albums that ranged from its debut Every Direction is North (2007) to its latest release, Translations (2012). Some of the tunes weren’t total ‘ragers,’ so it was a bit uncomfortable when you had to pay attention to an intricate jam while someone is so close behind you that they’re breathing on your neck, and the person in front is close to elbowing you in the face.

After seeing El Ten Eleven, it’s really a wonder they haven’t been picked up by a major label. They've been around since 2004 and judging by their latest performance, the duo’s time is coming soon...