Welcome to the Friend Zone: Ryan Reynolds and Amy Smart Remember What It’s Like to be Just Friends 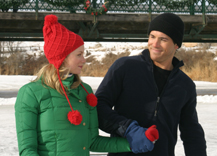 There comes a time in life when you may start to look at one of your close friends in a whole new light. It could be your lab partner in chemistry class, that cute co-worker you casually go out for drinks with or – worse yet – your childhood best friend. No matter who it is, though, you’ll always have that sinking feeling in the pit of your stomach that if you confess your feelings to the one you secretly love you’ll hear those dreaded words: "I love you, too … but only as a friend."

When Chris (Reynolds) confesses his love to best bud Jamie (Smart) on graduation night and hears that dreadful "just friends" speech, he storms off angry and humiliated. Determined to be the type of guy that someone like Jamie could love, he reinvents himself from a shy, overweight loser to a successful, smooth-talking lady killer. Unfortunately, Chris doesn’t just shed some excess weight in the process – he also loses the heart that made him someone Jamie could be friends with in the first place.

Ten years later during a plane malfunction en route to Paris, Chris makes an unexpected trip back home and runs into Jamie at a local bar. Determined to seal the deal with the girl of his dreams, Chris tries to woo the woman who broke his heart a decade ago. But the harder he tries, the more he finds himself slipping into the friend zone, and soon he begins to wonder if there even is a way to go from a "just friend" to a boyfriend.

Despite the friend zone being a universal experience, Reynolds was surprised that the script by Adam Davis was the first time he had heard of the issue being tackled on the big screen.

"I had wanted to work with [Just Friends director] Roger Kumble for a long time, and when I read the script I was just so surprised that no one had ever tackled the issue before," Reynolds says. "It’s just so interesting, and the script was so funny."

"It deals with that universal question, when you are close friends with someone, do you want to be just friends or do you want something more?" Smart adds. "When the film starts at the end of our senior year, Ryan’s character wants something more. The chemistry’s been there from the beginning, but popularity kind of kept the two apart. Now, 10 years later, can it work?"

To be believable as a nerdy, overweight teenager, 29-year-old Reynolds had to undergo a physical transformation. But unlike his role in last year’s Blade: Trinity, for which the star had to gain 20 pounds of muscle to be remotely convincing fighting opposite WWE Superstar Triple H, this time Reynolds simply relied on a fat suit and prosthetics. And although his character’s high school days are only a small portion of the film, Reynolds admits that the physical transformation really helped shape his character.

Of course, according to Reynolds, he didn’t really need much outside help to play the role. Despite being one of the hottest young comedians around – not to mention the future Mr. Alanis Morissette (who just happens to make a cameo in the film) – Reynolds says he was far from being the popular kid back in high school.

"I remember high school like it was yesterday," he says. "Just like my character, I was a sensitive kid. I tended to wear my heart on my sleeve. I went to a few different high schools, too, which always makes it hard to make friends. I just wanted high school to end. I think high school is tough for everybody, though. You get your biggest wounds in high school. It’s more of a prison than a learning institution."

Although Smart looks back at her high school days a bit more fondly, the 29-year-old states that, unlike Jamie, she was far from being the hottest girl in school.

"Although I was acting and modeling, I wouldn’t necessarily say I was popular," she recalls. "Not to say I didn’t do my own fair share of drinking and partying, but I wasn’t as daring as the girls who slept around. For some reason, that’s who I associate with being popular."

While Reynolds and Smart may not have been in the same social circles back then, just like Chris, they can both understand what it’s like to be humiliated in front of an old school crush.

"Oh yeah, everyone has that experience – it’s part of being human," Smart states. "Being attracted to someone and not having that feeling be vice versa … I remember having the biggest crush on this guy in middle school and literally just throwing myself at him. It didn’t work. He told me he just wanted to be friends."

Reynolds’ school crush memory, meanwhile, almost seems like a scene from a movie.

"My most embarrassing moment had to be when I finally got the courage to ask this girl on a date – well, for her phone number. We both were riding the bus home and my stop was before hers. So when I got up to leave, for some reason – I don’t know why I did this – I turned and looked back at her and gave her this smooth, Tom Selleck look. When I stepped outside, the door of the bus closed on top of my backpack and the bus started to drive away. I had to bang on the bus to get it to stop. When I got home I just wanted to crawl out of my skin and die."

This nightmare aside, Reynolds says that for the most part he was scared more by bullies than girls throughout school, but it was experiences like this that helped make him the person he is today.

"People live their lives in reaction to the negative and positive things that happen to them. It’s like my character – he grows up trying to become what he thinks the girl who rejected him would want."

Despite Just Friends bringing up some bad memories from the past, both Smart and Reynolds say they had a blast during production. The two were familiar with each other having auditioned for two movies together before, and their chemistry really helps set the tone for the film. But when you’re opposite one of Hollywood’s biggest scene-stealers, trying to remain professional onscreen can be a bit of a challenge, as Smart quickly discovered.

"Ryan is just so funny," she says. "He’ll really go for it. I remember this one scene where he’s freaking out cause his date doesn’t go well … he was improv-ing the whole time. It was a total Jim Carrey moment. Then there was this other scene in a diner – our first date – where he was just being such a prima donna. When he was delivering his lines he reminded me so much of an L.A. poser that I literally had to turn my head around the whole time, I was laughing so hard." Smart and Reynolds were grateful for the chance to laugh on-set, especially since both actors are following up Just Friends with dramatic features. Reynolds is currently in production for the follow-up to Joe Carnahan’s 2002 crime drama Narc, entitled Smokin’ Aces, while Smart can soon be seen in Peaceful Warrior, the big screen adaptation of Dan Millman’s best-selling autobiography. It’s a project Smart feels especially lucky to be a part of.

"I’ve had the book for 10 years – a friend gave it to me – and it just has these amazing life lessons in it … I highly recommend it. I actually brought it with me to read on the set of Just Friends and was talking about how great it would be if they ever made it into a movie when I heard it was being made. Then I got the offer. I know it sounds cheesy, but it’s very spiritual the way the whole thing unfolded."

And while both actors are hoping fans will grow to accept them in more serious roles, neither one plans on giving up comedy any time soon.

"Comedies are the most fun to make," Smart says. "I remember being at lunch sitting in the trailer watching the dailies … I just had the best, best time making this film."