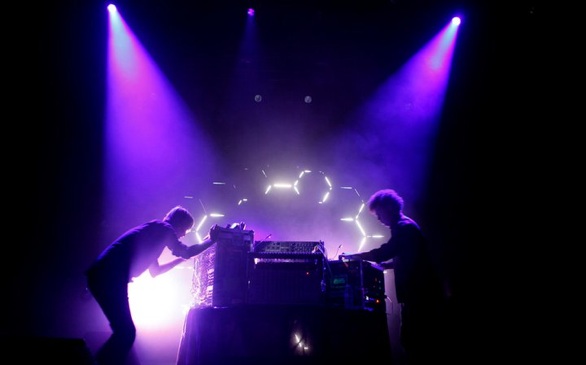 British electronic duo returns to its roots with new material and a true live performance.
(Credit: @mvladimirskiy (via Facebook.com/simianmobiledisco))

The term “live DJ” is as oxymoronic as the age-old dilemma of jumbo shrimp.  And in general, it boils down to the nature of the production. Hours and hours spent in a studio making music aren’t necessarily followed by the same work ethic live. Most DJs in the world can be seen hiding behind a laptop with nary an idea of what they are actually doing there when, in reality, it’s not much more than a couple of button presses and faux hand movements to make us believe they’re really working for it.

But there are a few acts that buck the lazy trends of modern live dance music. One of these endangered species is the British duo known as Simian Mobile Disco.

The duo, which actually started off as a novelty side project of rock group Simian, is comprised of James Ford and Jas Shaw two Brits who started the group back in 2005 as a means of making more free form, creative music.

The duo focused on traditional electronic house music with heavy doses of psychadelia early on before reaching commercial success in 2007 with the release of its first full-length Attack Decay Sustain Release.

With a handful of catchy, danceable singles like “Hustler” and “It’s The Beat,” Simian Mobile Disco became a household name.

With the release of its latest album and EP Unpatterns and A Form of Change, the duo strips down its sound to the basic forms.

Ford noted that the new direction is primarily influenced by their tastes and what they wanted to hear in a club.

“In the beginning, we were really trying to make music we wanted to hear ourselves,” he said. “We got sort of sidetracked into vocals a bit, but now we’re back to doing what we feel like we do best.”

This back-to-basics approach is familiar for the group, and it’s refreshingly simple in a genre that seems to overcomplicate itself every step of the way.

Ford continued, “Each element kind of has its own personality. It's not like there’s hundreds of different keyboards, synths or vocals. It’s all about how simple patterns interact to create something more complicated.”

This relatively simple approach to producing belies SMD’s intricate live show, one in which the band creates the entire show on the fly. Again, it cannot be understated how rare, and risky, this is. With a rig on stage that wouldn't look out of place in Apollo 13 era Cape Canaveral, Shaw and Ford layer together a live show with the same gear they use in their very own studio.

Ford elaborated, “It’s all created totally live.  We can change the structures and create things on the fly; basically, it’s the way we create songs in the studio but in a totally live way.”

For Simian Mobile Disco, producing the music completely live results in a sound that is tough to categorize in the same vain as nearly any other DJ performer. Much like any rock or jazz act, things are rough and don’t always go according to plan.

“We couldn't make our shows the same even if we tried,” said Ford. “The nature of our music is that the machines we use need more hands than we’ve actually got. So inevitable things will go wrong or be too loud or be the wrong sound, but that’s just the nature of the performance.”’

Like any live music duo, Simian Mobile Disco has to rely on each other to make sure the show goes off as planned.

Speaking in regards to their working relationship, Ford commented, “I suppose you build up a kind of language and set of unwritten rules that you become telepathic about. Especially in a live situation I can read what he’s going to do almost on a wink or a nod, which takes quite a long time to develop. If you tried to do a complicated live show with someone completely new, I think it’d fall apart quite quickly.”

Analog or digital, live or preset, the live appeal of electronic dance music has never been greater. It may have taken a while to explode in the states, a fact Ford described as nothing short of “quite bizarre really.” But no matter what side of the pond you are there is something universally infectious about the appeal of the dance floor.

“I saw Skrillex play at a festival the other day and kids were going batshit,” said Ford. “They were loving it.  I remember going equally batshit to The Prodigy. And people will get into that and maybe discover some more underground dance music. There’s lots of ways into it its a good thing.”

Simian Mobile Disco will perform at the Fonda Theatre on Nov. 30.