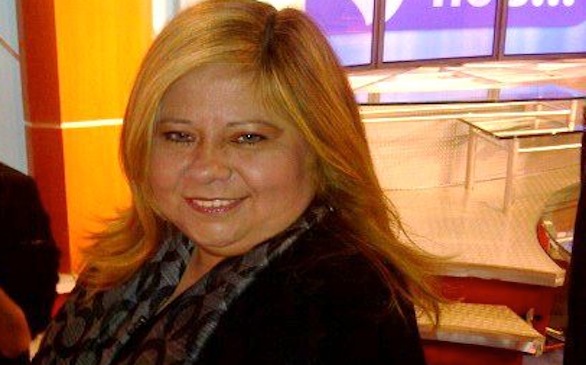 Maria Luisa Mispireta is a medium of Perú residing and practicing her gift in L.A.
(Credit: Facebook/Mistica Maria Luisa)

At the age of 15, Maria Luisa Mispireta moved to the U.S. from Perú. Already aware of her supernatural gift, Mari Luisa – whom resides in Los Angeles – practices the role of a medium as a profession.

Maria Luisa, 49, travels often, meeting requests from people outside of the U.S. She has many clients: housewives, singers and actors, among many others. She can’t directly name any of them due to ethics and confidentiality agreements. But she does mention that they’re well known.

Over the year, she’s executed several predictions, including that Barack Obama would win another term as U.S. President. On a more serious note, Maria Luisa has predicted a World War III, a catastrophic turn of events initiated by a country in the Far East.

Campus Circle: Many people don’t really know what a ‘seer’ and medium are. Tell us what it they are?
Maria Luisa: A ‘seer’ is a person who sees what others cannot see. It’s another dimension. A medium is a person who can communicate with the dead, with spirits, and serves as liaison between these spirits and the living.

CC: When you discovered your gift, what’s the first thing you thought of doing?
ML: The first thing I did was grab my little sister from her crib. We experienced an earthquake that almost leveled an entire city in Perú back in 1970. My little sister had just been born. Her crib was right next to a very large window, and I told my mom she had to move her away from that window. I began to cry and cry until she moved her. Seconds later, everything started shaking. This was a very strong earthquake, and that large window shattered completely. Had my little sister stayed there, she would have been killed.

CC: What is the biggest reward you’ve received in your line of work?
ML: Once, I was at a house in Bel-Air, ironing clothes. Suddenly, I noticed a very elegant woman, off to the side, crying. I approached her and told her, ‘Don’t cry. Your daughter will live. She’s not going to die. It’s not her time yet. Her knees will be fine.’ Time passed. Around 20-30 days after, I was walking in Hollywood with a friend who was visiting me from Perú, and a car approached me. The window lowered, and the person asked, ‘Were you the person who worked at so and so’s house?’ I said yes, and the person said, ‘I have to thank you.” She said I was right.

CC: Have you had any bad experiences in your practice?
ML: A while ago, a lady politician came to see me, and asked me if I could tell her whether or not her husband was cheating on her. I told her I didn’t interfere in those things, but I also told her she was facing a pregnancy, job loss, and a divorce. She became very upset, cursed at me, and left. Two months later, she shows up at my doorstep to apologize. She told me at the time, she underwent a procedure to prevent pregnancy, so she didn’t believe me at the time that she was pregnant. She also told me that she had lost her home, and her husband.

CC: How is the book project coming along?
ML: I’m currently looking for an editor, as well as for someone to write the prologue. It will be released soon, and it will be titled, Manual Para Una Mujer Desesperada (A Desperate Woman’s Manual.) It talks about how anyone can solve any problem they find themselves in, and how we must always have faith, value ourselves, and know why we are here.

CC: How do you see world events, especially in the U.S., unfold?
ML: The government will stay the same. I also foresee much seismic activity, volcanoes, etc…not desirable things, and I really hope I am mistaken. Also, I see the third World War near the end of 2013.