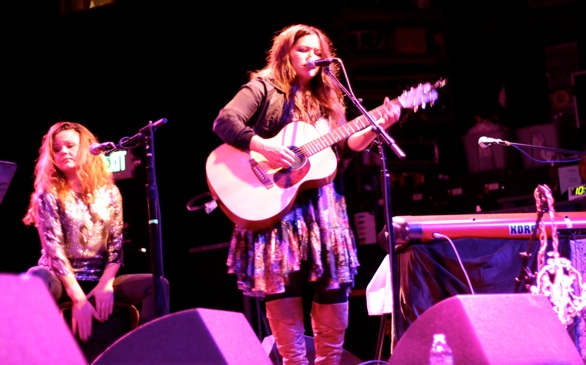 Fans cheered last Tuesday night as Rachael Yamagata took the stage at El Rey Theatre on Nov. 20. She hit the road for her fall tour in support of her new EP, Heavyweight.

Finally coming on around 10:30 p.m., Yamagata was greeted by overwhelming excitement from a loyal audience. The show was very intimate, with a main seating area and standing area towards the back. This allowed Yamagata to get up close and personal with her fans. She made a great impression as she talked to fans in the audience, who were all more than happy to be able to speak a few words with her.

Sometimes referred to as the “troubadour of heartbreak,” Yamagata did not disappoint with her careful selection of intimate and emotional songs in the show. Switching between playing songs on the piano and the guitar, Yamagata delivered an amazing sound to pair with her smooth, romantic voice.

Her piano skills came into great play with “Elephants,” and she sang her heart out with “Worn Me Down.” She also introduced the slower, piano symphony “Heavyweight.”

She sang many new songs from Heavyweight as well as songs from her earlier 2012 independent release of the album Chesapeake. She brought friends to the stage to join in for the crowd favorite “Dealbreaker,” which incorporated many different sounds and elements. The show contained many sounds and her band was large, with her band members playing the violin, cello, electric guitar, drums, acoustic guitar and of course Yamagata on the piano.

With a great attitude and the help of the smaller intimate venue, Yamagata was able to connect with her fans on a personal level. When thanking the crowd, she said how the audience made her “feel all warm and fuzzy.”

With her down-to-earth personality and ability to connect with an audience on a deeper level, Yamagata’s shows are definitely worth attending.

Her latest album Heavyweight, as well as Chesapeake, is available now.