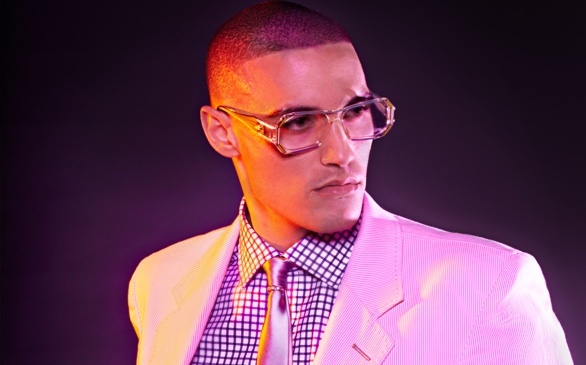 DJ Dainjazone is the tour DJ for Party Rock Crew (LMFAO) as well as performing his own gigs.
(Credit: Anderson Group Public Relations)

It isn’t that far back that house and hip-hop music sipped from different drinking fountains. But since music genres constantly experiment with the lights off, new subgenres are being birth into the word.

Trap, with its proud papas like Gucci Mane and Young Jeezy, and house, with its producers like David Guetta and Deadmau5, conceived a new micro-genre: trap house, where “the streets” meets electronic beats.

DJ Dainjazone is on a mission to make trap house the dubstep of 2013. Back in August, he released a mixtape, Bottle Rats in the Trap, to pay homage to people who steal drinks from bottle buyers in the club. He played a snippet of it for party-goers at Pacha Nightclub in Salou, Spain.

“I never expect crowds to go crazy for trap,” said DJ Dainjazone. “Because it’s new all around - well in the club scene, not to DJs.”

He plans to spin trap around the world.

In an interview with Campus Circle, he talked more about the genre and his experience being electro-rap duo LMFAO’s tour DJ.

Campus Circle: You’re touring with Party Rock Crew. Has that experience impacted your DJ-ing?
DJ Dainjazone: Absolutely. I’ve learned a lot. It’s also made a bigger name for me. To be associated with Party Rock is a big thing. I started out this year doing well for myself, but once I jumped on tour with the guys, it really took off to another level.

CC: Last week you were in Japan, China, Portland and Hollywood. Have you reflected on the experience?
D: For every tour it’s the same show. That doesn’t mean that it’s boring or to be taken for granted, but I really reflect on the fans, especially in Japan. They were respectful. Usually people go crazy in between songs. They’re such a polite group of people. They would be quiet until the next song or until we came back out for the “Sexy and I know It” encore. When we did Mexico, it was my first time there, those fans were crazy. They had never seen us before. I don’t know how often artists go through Mexico [as of recent], but they showed a lot love. That definitely stood out compared to a lot of the countries we’ve been to.

CC: What gets you more hyped: the music you’re playing, crowd reaction or visual production?
D: I don’t see much of the visual production because I’m on the other side, but it definitely is the fans. When the fans react, it makes you feel good. It empowers you and definitely makes your job easier.

CC: In between the tour, you’ve been doing your own gigs. Are the experiences different spinning for Party Rock Crew versus your own gig?
D: They are very different. With Party Rock, we have dancers, hype men; it’s a show. When I do something with Red Foo, it’s a show. You compare that with what I do, by myself, they’re like two different animals. I do what I can. I entertain and keep people dancing.

CC: What’s your creative process like?
D: There’s a lot of thinking involved. I don’t just want to put tracks back-to-back and let it be a regular mix. I want to add some scratches. I want to add some word play. I’m selective when it comes down to tracks I use for a mix. There’re a lot of mental blocks. I have to step away and step back into it.

CC: I want to live vicariously through you for a minute. I’m from Northeast Florida, but I love Miami. LIV is my favorite club that I’ve never set foot inside. You said you wanted to DJ there and you did recently. What was the feeling like?
D: The opportunity to spin there is probably above and beyond a lot of opportunities in the DJ world. Unfortunately the night I did it, it was a slow night. But the experience I had before that, with the Party Rock Crew and LMFAO, was the day after the Heat won the championship. Everyone was turned up. The crowd was going crazy for everything I played. It was an incredible experience. No matter what I played, they were with it. I just remember jumping up and down with the hype guy. I was amped up from the energy of the crowd and the new songs I was playing.

CC: Red Foo has a monthly party in Vegas. For anyone who hasn’t been, describe what it’s like?
D: It’s the best party in the world at one of the best clubs in the world, Marquee. The decorations add to the atmosphere. The glow sticks, foam sticks, Party Rock foam fingers, confetti, lights, funnel shots, spraying people with champagne and pouring alcohol in people’s mouth - all these things add up. Combine that with the energy of Party Rock and Red Foo and his DJ set, it’s a show. Red Foo gets out there with his iPad. He’s dancing and DJ-ing, and he has three or four hype men dancing. It’s a show.