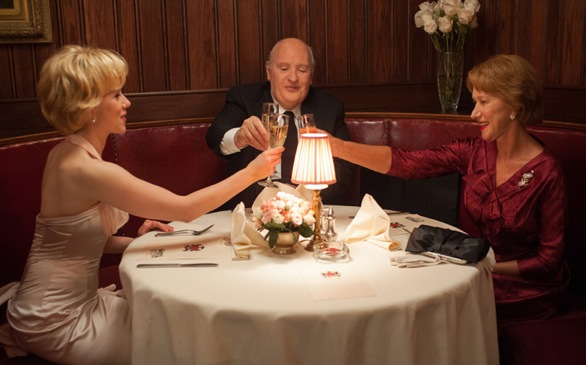 Anthony Hopkins, Helen Mirren and Scarlett Johansson give a spectacular performance in the film.
(Credit: foxsearchlight.com/hitchcock)

It's 32 years after the death of the Master of Suspense, and Alfred Hitchcock is once again the subject of Hollywood buzz with the release of Sacha Gervasi’s Hitchcock.

Based on Stephen Rebello’s book Alfred Hitchcock and the Making of Psycho, what this bio-film truly explores is the amazing relationship and collaboration Hitchcock shared with his wife and creative accomplice, Alma Reville with Psycho as the thrilling setting. Played brilliantly by Anthony Hopkins and Helen Mirren, the pair gives us pure on-screen magic throughout the entire film.

Known as one of the greatest directors of our time, Alfred Hitchcock is responsible for Hollywood classics like Rear Window, Vertigo and North by Northwest and reinventing the psychological/thriller genre. However, as many may not know, his biggest box office success, Psycho, was not an easy production to bring to the big screen.

Hitchcock begins right after Hitchcock’s release of North by Northwest in 1959 as the director is in search for his next picture. Restless and adamant about doing anything but terrifying, Hitchcock became obsessed with recent news of serial killer Ed Gein. He then went on an ambitious journey to convince Paramount Studios to finance the film.

It wasn’t long before Hitchcock mortgaged their home and financed Psycho himself, beginning the production of what was to be his most titillating film yet. As exciting as that is to watch, what really drives the film is the synchronized thinking Hitchcock and Alma had that lead to some of Psycho’s trademarks. From casting to script revisions to running the set, Alma Reville’s input was unparalleled.

As it often is with depicting a real person, the question on everybody’s mind is: Was Anthony Hopkins the right choice? The answer is a hundred times yes! Hopkins plays the role with just the right amount of paranoia, macabre sense of humor and a rare vulnerability only Alma got to see.

The film really spans a variety of different clashing points during the filming of Psycho that speak in a universal level in regards to fame, marriage and deep-seeded desires.

For Hitchcock, the need to fully envelop his actors in the troubled mindset was crucial to achieving tension. However, it would often reach the point of obsession with his blond female leads. When Janet Leigh, as played by Scarlett Johansson, gets cast in his film, so begins the snag. Although fully supportive of the production of the film, Alma was often in the shadow of Hitchcock’s limelight.

When the opportunity to co-write a film with Whitfield Cook (Danny Houston), presents itself, her full attention is driven away from Psycho, causing tension and rifts in their relationship as well as Psycho. Gervasi does a remarkable, almost character study of Hitchcock in this film, digging at all the famed director’s psychology and weaknesses, as seen in a warm hearted speech Hitchcock gives his Alma.

Hopkins and Mirren given nothing but a superb performance, full of laughs and an amazing fusion of mystery and quirks. Joined by an impressive supporting cast, Hitchcock will certainly have fans raving - it's one of the most well done films of the year.

Hitchcock is now playing in theaters.