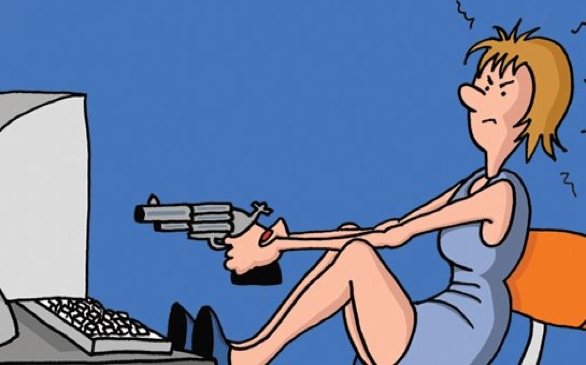 Gemini Adams is the author of The Facebook Diet.
(Credit: Facebook.com/techdetox)

These are some of the many things that you can spend your time doing on Facebook - and it may be a lot more time than you’ll bear to admit.

Gemini Adams, author of The Facebook Diet: 50 Funny Signs of Facebook Addiction and Ways to Unplug with a Tech-Detox, knows too well about Facebook addiction from personal experience.

She was inspired to create the heavily illustrated book after her and her friends’ relocations left her staring at the computer screen, trying to stay connected.

Although she is aware that Facebook addiction can be a serious detriment, Adams wanted to keep her book light.

“I actually just thought that rather than giving serious ways to detox and get off technology, by making them funny…and being kind of ridiculous…it opens the door for people to get them to actually discuss it and at least perhaps a little of self-reflection,” said Adams.

Hopefully, college students are among those self-reflecting, because a University of Bergen study found that they are among the most at risk for social media addiction.

College students remain the largest group of users of the social network, and considering it started on a college campus, Adams said it’s not too surprising.

“I think at that age, you’re still so impressionable,” she said. “You’re still trying to figure yourself out, figure other people out. It makes it more attractive because there is an avenue there that allows you to do that. Nobody knows you visited [his or her] Facebook page. So you know, if it’s a guy in your math class that you kind of fancy, you can sort of check out his page and see what’s going on…”

Unfortunately, socializing (or stalking) can be quite the time drain, and Adams has seen relationships break up because of it, even a marriage.

It can also be a detrimental to your job.

Adams shared, “I know a lot of writers, and I think out of many of the professions, they suffer the most because it’s so easy when you sit down to do something creative or to write an assignment and you just sort of hop onto Facebook for a few minutes, and a half hour goes by and another half hour goes by where you didn’t write anything.”

However, as long as one knows how to manage time effectively and knows how to use it in moderation, Facebook can be the useful means of communication it was created to be.

Adams reasoned, “I think despite the fact there’s a lot of bad publicity about bullying on Facebook (or people making inappropriate comments) to counterbalance that, there’s an awful lot more positivity in terms of the way it brings people together.”

She added, “If you think about what people have done with Facebook during major disasters such as Hurricane Sandy, the immediacy with which people come together and support each other and provide information and donate money and share knowledge is absolutely phenomenal.”

Adams also thinks it won’t be going out of style in the same way other social network sites, like Friendster and MySpace, have.

“We’re stuck with Facebook,” she said, chuckling. “I think everybody’s usage fluctuates throughout their life according to different life events, different things that they have going on. It’s become so big, and it’s become so intrinsic to society now that I’d be very surprised if it disappeared…I think it’ll just have a changing role for each individual.”

The hope is that everyone stays aware of the way they use Facebook and its role remains positive and constructive.