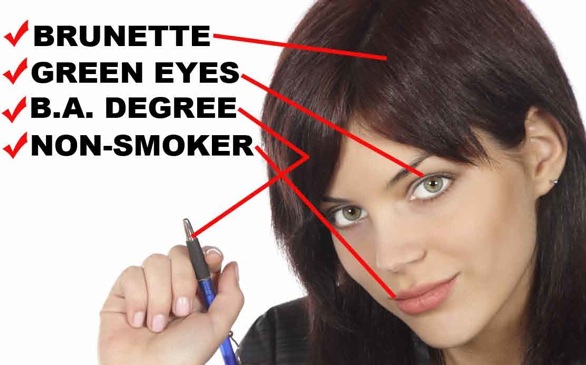 Imagine the perfect L.A. woman. Think of her hair color, her eyes, her level of education and her drinking and smoking habits. According to a study conducted by researchers affiliated with the dating site WhatsYourPrice.com, the woman you are picturing in your mind is most likely a non-smoking, green-eyed brunette with a Bachelor’s Degree who drinks socially.

Society has been obsessed with perfection for a long time, which is probably why the people at WhatsYourPrice.com thought it would be worthwhile to find out what L.A.’s perfect woman looks like.

For those who don’t know, WhatsYourPrice.com prides itself on being the “only dating website where money can buy you love – or at least a first date.” The site is the third project created by entrepreneur Brandon Wade, whose previous contributions to the online dating world include SeekingArrangement.com and SeekingMillionaire.com

All of Wade’s sites have a certain superficial quality to them that has drawn immense criticism from major media outlets. However, WhatsYourPrice.com has endured the most criticism because it is the only site in which the men actually pay money to get a first date.

Ultimately, people search through the profiles and then the “generous” person offers an amount of money to get a first date with an “attractive” person. The point is to allow ordinary people to get the chance to date good-looking folks who would (supposedly) never give them the time of day without some sort of fiscal benefit.

In response to the critics who say his site is unbelievably superficial, Wade said, “I agree with the criticism, because when it comes to dating, in the very initial phases, everything is superficial.”
He added, “Introducing the money component at this stage is ok.”

Wade said that the site is very focused on getting that first date, and if it takes money to do that, so be it.
“You know, some people have big muscles and a six pack, some people are great pickup artists and use their charm – people use whatever bait they have to get a first date – in this case it’s money,” he said.

In the study to determine “L.A.’s Perfect Woman,” Wade’s team surveyed 5,000 males from his site who live in the area and asked them to place a price on their preferences for certain female attributes: hair color, eye color, education, drinking habits and smoking habits.

According to Wade, “If a man is not willing to put a dollar amount on what they like, then it is difficult to determine what they want.”

The research shows that what they want is the green-eyed brunette mentioned earlier. And they’d be willing to pay $251.11 to go on a first date with her.

Before analyzing the results of this research, it is important to point out some of its flaws. For instance, the 5,000 males surveyed for this study were all members of WhatsYourPrice.com, which means they are all men who are willing to pay for dates. Because of this, it could be argued that these men fail to represent the average L.A. male who might not be the kind of guy to pay someone to date them. Thus, it is more accurate to say the research has found “The Perfect L.A. Woman According To The Men Who Will Pay To Go Out With Her.”

Nonetheless, the study still provides some intriguing and unexpected results within its constrictions. For instance, many might find it surprising that these 5,000 Angeleno men prefer a brunette to the quintessential California blonde.

“I guess there’s a lot of people in L.A. who walk around with blonde hair, and I think the men have more desire for qualities that are harder to find,” said Wade.

Wade hypothesizes that men are more attracted to qualities that are taboo or that deviate from the norm. Thus, he explained that the high prevalence of blondes in L.A. results in a higher male desire for brunettes.

Like a true entrepreneur, Wade explained the phenomenon of attraction using business logic: “It’s a supply and demand thing,” he said.

Another aspect of this research that is striking is the way L.A. men feel about a woman’s education. The research indicates that like women to be educated, but not too educated. The bids get higher as the level of education increases, but they begin to decline at the Master’s degree level.

This is very different from men in Chicago who see the “perfect woman” as a blonde with a Master’s Degree. The could because of the idea that Chicago men have a higher self-esteem than men in L.A. and do not feel belittled by women who know more than them.