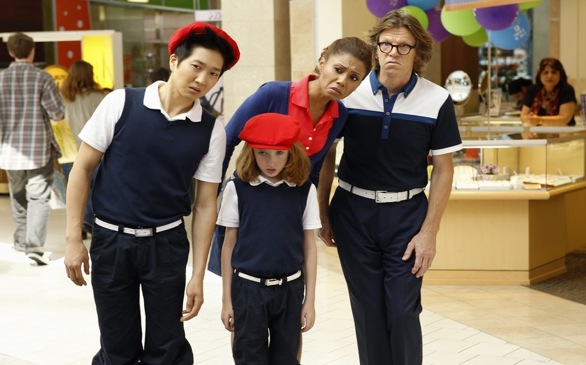 ABC’s “The Neighbors” star (left) talks about the show and his favorite things to do in Koreatown.
(Credit: http://beta.abc.go.com/shows/the-neighbors)

As an alien teenager in a show called "The Neighbors" on ABC, Tim Jo has some sort of magnetism that draws many people to him. And in real life, Jo isn’t a whole lot different from his character at all. He is a friendly actor with charisma and is not afraid of taking on difficult new roles.

Highly open to new experiences, Jo talked about his role on the show as well as his experiences in Koreatown as a resident.

Nominated for a People's Choice Award in the Favorite New TV Comedy category, “The Neighbors” is a standout amongst the comedy shows in the television market with its fresh plot and exotic characters.

"The Neighbors" has an unusual yet imaginative storyline and setting. Marty Weaver (Lenny Venito) and his family move into a fancy neighborhood in Hidden Hills, N.J., hoping for only the best for his children.

However, the residents in this perfect community turn out to be aliens from the planet Zabvron, and they are waiting to go back home. At first, the Weavers try to run away from the aliens. But after discovering that the aliens are going through similar dilemmas in life, they become close friends.

Jo plays Reggie Jackson, one of the two alien sons of the "leader" of aliens. He thinks the best part about living with humans is Amber Weaver, the human daughter who has become the person of his desire.

"I played a musician, a college student in the ‘80s and many more,” said Jo. “I once had to lose 20 pounds for a role I wanted to play, but I love challenging new roles and working with new people."

When first presented with the script, Jo was immediately captivated and decided to play the role of Reggie Jackson.

"The writing was good, and I definitely loved my character,” he said. “I've always wanted to play in a family comedy, and this character was weird but also innocent in that he trusted everything that anyone said. If he is told that he is not supposed to eat vegetables, he would not even touch a green thing in any circumstance."

Although most of Jo's time nowadays is dedicated to the show, he did open up about his personal time in Koreatown to Campus Circle – he was full of engaging stories about the exciting spots he visits frequently.

Since Jo lives in Koreatown and he can always walk or skateboard to his favorite places, he recommended a few hotspots in Koreatown for high-quality food and an unique atmosphere that is not necessarily Korean-related.

"R-bar is an underground bar with good music and the best bar food,” said Jo. “Foreigners are not intimidated because there is a good mix of different people around the world."

Jo recommended the steamed buns, French fries and duck fat fries at R-bar, which is located on 3331 W. 9th Street. He also pointed out that a password is required to get in. You can find out what the password is on one of its social media outlets such as, Facebook and Twitter.

Another place he frequently visits is A-won Japanese restaurant located on 913 S. Vermont Ave. The giant bowl of hwe dup bap, which is rice mixed with Sashimi, is very satisfying to eat. Not only is it healthy, it is more than worth the price. It costs $16 per bowl, but it is so huge that it is enough for two people to share.

If you are looking for a bar with an old-school Italian vibe, Jo recommended The Prince, located at 3198 1/2 W. 7th Street. He didn’t forget to mention his favorite item on the menu, which is the roasted chicken. He also said the quiet atmosphere is a perfect place for him and his friends to relax.

Lastly, Jo frequently visits (more than four times a week) Han Kook Supermarket located on 124 N. Western Ave. Instead of grocery shopping at the market, he goes to the very back of the store and asks for baked sweet potatoes and Boong Uh Bang, which is a warm pastry filled with red bean.

Jo visits these favorite places because of their delicious food and unique atmospheres. But most importantly, he visits to meet new people. Always down for sharing his own stories, he is ready to ask questions, listen to others and welcome new interactions in his life.