Can You Find Love in a Nightclub? 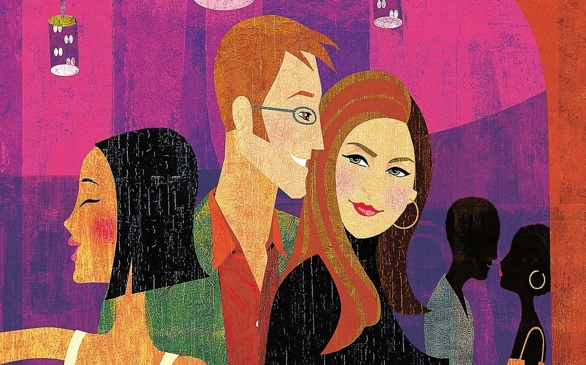 Not all guys in clubs are filled with “players” and scumbags; you might find a real catch.
(Credit: Theresa Schiffer/Milwaukee Journal Sentine/MCT)

Many college girls go to nightclubs to dance, party and unwind from school. And sometimes they have to endure sleazy guys in order to enjoy the night with their friends; most girls never expect to find a boyfriend while out on the town.

However, I venture to say that there are indeed decent guys at clubs. I am no love expert by any means, but I am going to share with you my own experience on finding love (unexpectedly) in the club and what to look out for.

With the goal of having a good time and washing away the pain of a fairly recent breakup, I stepped into a nightclub with a heavy heart on a random Thursday night. I had no expectations in finding love there at all. I mean, we all know the cliché that guys at nightclubs are generally not a good catch.

“Hi, what’s your name?” was the first thing he said to me. We started to talk, and the conversation was good and flowed easily.

Even though he gave me a good vibe, due to my preconception that 95 percent of guys in clubs are just trying to arrange a quick hook-up, I told him I had to rejoin my friends. But before we parted ways, he asked for my number. I gave it to him, and I figured that was that.

I was surprised when he texted me a while later. He asked where I was and if I wanted to meet somewhere in the club. I was impressed, and it had reinforced the good vibe I got from him earlier. I thought: If he really was a player and just wanted to have a one-night stand, he could easily chat with another girl in the club.

I spent the rest of the night dancing and talking to him, and he suggested that we should hang out. We found out that we actually have a lot in common: We are both left-handed, like to write and come from a similar cultural background. His charm and sense of humor captivated me, and I could not wait to hear from him.

Everything else went smoothly from there. We hung out, talked on the phone and texted every day, and we got to know each other on a deeper level. We became a couple a few months later.

So, I have done the unthinkable and am in a relationship with someone I met at a club. However, some people have different views on “club love.”

“Finding love in a club spells a great recipe for trouble and complex situations,” said Stacey Wretlind, a junior at UCLA. “Just think about why people go to night clubs in the first place. I know some guys who go to clubs genuinely for fun, but most seek for something extremely short term - something that starts and ends within one night.”

“Well, I don't really believe that you can find true love in clubs,” he said. “It's just a place for people to dance, drink and let loose. So, even if you meet someone you are interested in, it is likely to be a temporary feeling.”

There is no denying that there may be a lot of “players” in the club. But, like any other places, a club can have a handful of decent guys.

Whether the relationship will develop into something more serious is circumstantial. But who knows? You may find yourself actually falling in love at a club.