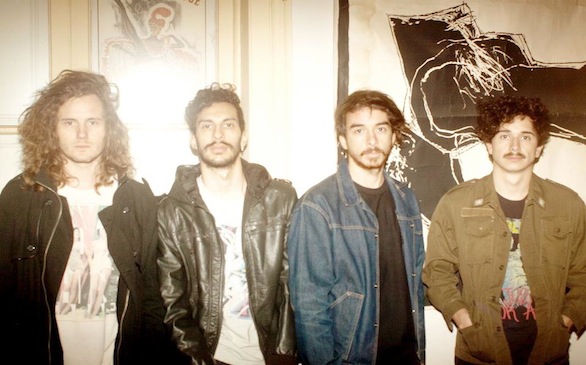 Chilean alternative rock band Astro is thriving with their independent style. Interestingly enough, they’re the latest band to get a U.S. debut from Nacional Records, a Latin alternative label.

Astro, founded in 2008, consists of Andrés Nusser, Octavio Cavieres, Nicolás Arancibia, and Daniel Varas. Their self-titled album, which is now available, carries the tracks “Ciervos” and “Colombo,” among others.

Even with their occupied schedule, both Nusser (vocals, guitar) and Cavieres (percussion, drums) gave Campus Circle an interview. Here’s what they had to say:

Campus Circle: Can you tell us how the band was formed?  Specifically, how did you guys get together and in what year did you guys form?

AN: We got an opportunity to perform in Chile. At that time, we didn't really have any music, but we had desires of forming a band. In about a week, we put together seven songs.

CC: The name of your band, Astro, seems to have a mystic meaning. Does it have any special meaning in particular or is it meant to just signify strength?

AN: The name refers to a song I wrote a long time ago called. It was about a boy who's summoned to space by the sun.

CC: The band's U.S. debut album was released in September. What can you tell us about the album's concept and the development process?

AN: The concept of the album is more like a collage of different elements, not one thing in particular. Amongst the elements we used are nature, the Caribbean, Gods and humans. We aimed to do this in the most natural manner possible, yet incorporate elements of mysticism in the most real manner possible. We also allude to the importance of the evolution of animals and nature.

CC: Some of your songs have a tropical sound. Where did the inspiration for that come from?

AN: I've always been a fan of Latin American literature, so the inspiration came from a lot of reading. The Caribbean is also a place of lots of natural and faunal beauty.

CC: This is your first time in L.A. How do you guys feel about your visit?

OC: It's our first time in L.A. and the second time in the US. It's been a very fun experience.  Upon arriving, we had dinner and began sightseeing. We also visited the office of our record label here. They have very impressive offices. We're hoping to start touring around the U.S. very soon.

CC: What can you tell us about the lyrics for the song, “Cervios”?

AN: It's a small story that, as I mentioned before, has elements of nature, Gods and human beings. The video has exactly the same characteristics of the lyrics.

CC: What about the song, “Colombo”?

AN: It's a fictional story about rabbits. They visit the city for the first time, and after being there for a few days, they conclude that they don't like it. The song also talks about how the humans sing to the rabbits so they don't leave.

CC: What do you guys have on your agenda for the rest of the year and the beginning of next year?

AN: We have planned to go to Mexico. We have an important show in Guadalajara. We also have some performances scheduled in Chile and Panama, as well as Costa Rica, Puerto Rico and the Dominican Republic. Also, we’re going to visit Colombia in March. We want to do promotion for the album throughout Latin America, Europe and the U.S. Our goal is to internationalize the album as much as possible through publicity and performances.

CC: What's the band's stance on social media? It's a technology that's evolving and expanding around the world. How does the band employ social media?

AN: Facebook is our main publicity platform. Nowadays bands, like us, use these sites to communicate directly with their fans. It's very efficient because we can respond to their feedback and keep them informed of upcoming shows, etc.