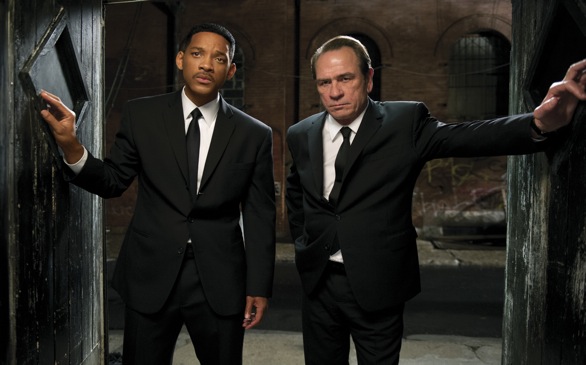 Men in Black 3 is the third installment in the funny, sci-fi franchise.
(Credit: Wilson Webb)

Action! From the writer-director team behind The Proposition comes Lawless, a blood-soaked tale of three prohibition-era bootlegger brothers going to war against a corrupt cop and mob competition. Shia LaBeouf and Tom Hardy lead the ensemble cast.

Sylvester Stallone assembles an even bigger collection of action icons for The Expendables 2. The Dream Team of mercenary squads takes what they think will be an easy mission, only to find they have become the world’s last hope. Jean-Claude Van Damme and Chuck Norris join the all-star shoot ‘em up.

The Majors: Bid farewell to Hogwarts with Harry Potter & The Deathly Hallows: Parts 1 & 2: Ultimate Edition. This box set includes the final two films of Harry’s climactic showdown with Voldemort. It also includes the conclusion of the epic making-of documentary and more.

Men in Black 3 follows agent J (Will Smith) back in time to the ‘60s, where he must stop an alien from killing a young Agent K (Josh Brolin doing a dead-on Tommy Lee Jones) and changing the future.

Set against a scenic Miami backdrop, Step Up Revolution follows a group of flash mob dancers who use their moves to protect their historic neighborhood from an encroaching real estate developer.

In Toon: A ghoulish stop-motion film for the whole family, ParaNorman follows an outcast boy who can talk to the dead. Now with a witch’s ancient curse raising the dead, Norman is the town’s only hope. Anna Kendrick, Jeff Garlin and John Goodman provide voices.

Jack Black returns alongside a stellar voice cast, including Angelina Jolie and Dustin Hoffman, in the short film Kung Fu Panda Holiday. Po (Black) has to team up with the Furious Five to throw the prefect winter feast.

Stranger Than Fiction: Last Call at the Oasis is a timely and vital documentary tackling the subject of the water crisis already in progress that threatens humanity’s survival. From chemical contaminants that change the sex of frogs to decades-long droughts, myriad issues demand we educate ourselves.

The Idiotbox: An incredibly entertaining “what if?” show, “Ancient Aliens” proposes that extraterrestrials visited earth in antiquity and left their mark on humanity. Season 4 uses the Japanese tsunami as a springboard to look into natural disasters.

From the Vault: International superstar Alain Delon brings his characteristic verve to bear as the iconic masked freedom fighter in 1975’s Zorro. This Italian swashbuckler comes digitally restored in its complete form, climaxing in one epic sword fight.

Blu Notes: The perfect gift for the comic fan in your life, Watchmen: Collector’s Edition contains the ultimate cut (restoring the Tales of the Black Freighter animated sequences to the director’s cut), two hours of bonus features, plus a beautiful hardcover edition of the classic graphic novel.

Bill & Ted’s Excellent Adventure follows two metal heads (Keanu Reeves and Alex Winter) destined to bring humanity together with their music—if they can only pass their high school history class. Luckily, George Carlin arrives from the future in a time machine phone booth to give the boys a crash course.

A young Christian Bale stars in Steven Spielberg’s Empire of the Sun. This adaptation of J.G. Ballard’s autobiographical novel follows an English boy separated from his parents and taken to an internment camp in Japanese-occupied China.