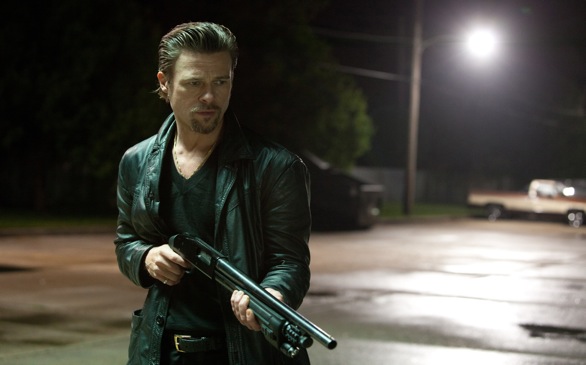 The Weinstein Company is pumping out films near the end of this year hoping to be a part of the Oscar race. Its latest debut is Killing Them Softly from director Andrew Dominik, who once again is reunited with The Assassination of Jesse James star, Brad Pitt. Adapting the 1974 crime novel Cogan’s Trade, Dominik puts forth a dark and sinister film looking at the underbelly of crime.

Filmed in Louisiana but taking place in South Boston, the film follows a seedy mob world that goes awry. Markie Trattman (Ray Liotta) runs a card game that is held up by two near do-wells (Scoot McNairy from Argo and Sam Mendelsohn from Animal Kingdom), who manage to pull off the heist. When word reaches the higher ups, a resolution requires cool-as-a-cucumber hit man Jackie Cogan (Brad Pitt) to come in and rectify the situation. What unfolds is a real portrayal of how things get “right” again.

Immediately, the film opens to contrasting images and sounds creating discomfort. Taking place in September 2008 during the Obama-McCain campaign, this theme remains a constant backdrop for the film. Speeches from then Senator Obama and President Bush play throughout, whether they are in a bar, card game or car. The audience is made very aware of the tension of these times and the hope for a better future.

However, this starkly contrasts what we see happening in the film before our eyes. These hopes and dreams of a better world are completely lost on the characters in the film.

Killing Them Softly was shot entirely with a muted palette to really give the audience a depressed feeling of their world. You’re drawn into this place with them, and there are no cheery flashes of color because this is not their world.

Dominik makes some really artful choices like depicting the experience of an actual heroin user, what that might feel like coming in and out of consciousness and some highly graphic and violent fight scenes. However, at times it felt a little too art house and braggadocios.

Also, the film was a male-saturated cast, with only one woman (who was only in a five-minute scene) in the entire film. Although the film was very monologue-heavy, Pitt was a standout in his role as Cogan.

There are no bells and whistles when watching this world, and you are taken on a grueling journey. A larger global story is being told while we watch a smaller story unfold before us.

Cogan at one point says, “This isn’t a country; this is America. And America is a business.”

It was fascinating to watch how this world exists and runs on a different set of rules. Killing Them Softly is worth a trip to theaters.