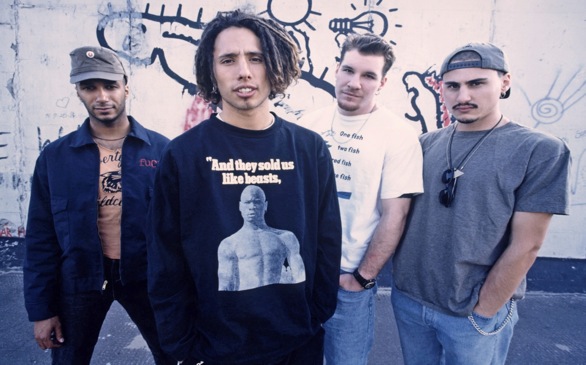 Rage Against the Machine has come out with a CD box set you’ll want to grab.
(Credit: Lisa Johnson )

FOR REGGAE FANS
Reggae Golden Jubilee: Origins of Jamaican Music – 50th Anniversary
(VP Records)
Edward Seaga, the man who was Prime Minister of Jamaica during the ‘80s when reggae music was blowing up worldwide, personally curated this 4-CD, 100-track compilation. Seaga’s selections begin with the 1959 pre-reggae single “Easy Snapping” by Theophilus Beckford and closes with Mavado’s 2009 cut “I’m On the Rock;” the space in between is packed with hits and favorite cuts from Shaggy, Etana, Black Uhuru, Yellowman, Maxi Priest, Queen Ifrica, Beenie Man, Bob Marley and virtually every other reggae artist you can think of.

FOR AMERICANA FANS
Johnny Cash
The Complete Columbia Album Collection
(Columbia/Legacy)
Johnny Cash first came to Columbia Records in 1958; he brought the label an album called The Fabulous Johnny Cash that contained the #1 country hit “Don’t Take Your Guns to Town.” His subsequent output for the label, a little mind-boggling by its sheer volume, is all included here on 63 CDs. Previously hard-to-find live albums Johnny Cash pa Osteraker, Strawberry Cake and Koncert V Praze are included as are two new compilation discs put together just for this box: a collection of Sun Records tunes from 1954-58 called Johnny Cash With His Hot & Blue Guitar and The Singles, Plus, a 2-CD set featuring non-L.P. cuts.

FOR ROCK FANS
Rage Against the Machine
Rage Against the Machine - XX
(Epic/Legacy)
This 2-CD/2-DVD 20th anniversary edition of Rage Against the Machine’s self-titled debut album overflows with cuts and clips that will send fans into a lather; the CD holding the remastered version of the album is appended with live takes on “Bombtrack,” “Bullet in the Head” and “Take the Power Back” while the second CD marks the first official release of the album’s demo tracks, including previously unheard rough versions of “Darkness of Greed” and “Clear the Lane.” The DVDs feature the band’s first-ever live performance, an 11-song set filmed at California State Northridge in 1991, 13 songs filmed at different locations in the early ’90s and music videos.

FOR BLUES FANS
B.B. King
Ladies and Gentlemen, Mr. B.B. King
(Universal)
King is one of the most endearing and enduring bluesmen of the modern era and this 10-CD box is a career spanning retrospective. Each of the CDs represents an era, sound or theme. The Key to the Highway is full of cheating or breakup songs like “Sinner’s Prayer,” the title track performed as a duet with Eric Clapton and the Christmas blues of “Backdoor Santa.” Other discs carry titles like When Love Comes to Town, Rock Me Baby, Lucille Talks Back and The Thrill is Gone and each has rare tracks appended. Guest players include the Rolling Stones, U2, Elton John and others. Nearly 200 tracks in all.

FOR ELVIS FANS
Elvis Presley
Prince From Another Planet
(RCA/Legacy)
Elvis performed two shows at Madison Square Garden in New York City on June 10, 1972 and both are presented here in this 2-CD/1-DVD set. The hit-packed set lists are virtually identical for both shows, but the earlier set has a few extra songs, including “Until it’s Time for You to Go,” “Blue Suede Shoes,” “I’ll Remember You” and “Reconsider Baby.” The DVD holds a short documentary, footage of Elvis’ pre-show press conference and about 20-minutes of fan-shot video synched to audio from the first show.