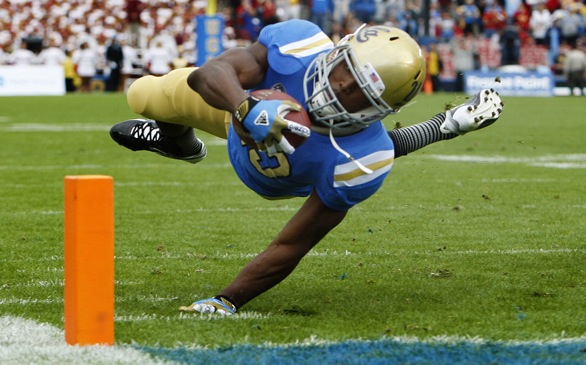 Running back Johnathan Franklin has been a prominent impact for UCLA this season.
(Credit: Gina Ferazzi/Los Angeles Times (MCT))

Although it took five years, Los Angeles finally saw the fall of the Trojans and rise of the Bruins when UCLA defeated USC 38-28 on Nov. 17 to secure a spot in the Pac-12 title game.

Thusly, the Bruins earned respect as Pac-12 South Champions. Now, they will face Stanford (10-2, 8-1) in the Pac-12 Championship Game on Nov. 30 at Stanford Stadium. UCLA has a shot at playing in the Rose Bowl game.

UCLA (9-3, 6-3) began the season as an unranked team, but Jim Mora has led the Bruins – in his first season as head coach – to a ranking of 17th in the AP Top 25 polls and 16th in the BCS Standings. By instilling discipline and leadership skills into his players, Mora has started a new era for UCLA. An era all Bruin fans can be proud of.

Mora said his players want to win every week regardless of what team they’re playing.

Mora started his relationship with the team by hauling them east of Los Angeles to San Bernardino for part of preseason camp this past summer. By bringing his boys to practice in 120-degree weather, it was apparent he wouldn’t be taking it easy just because he was moving from the NFL to college football.

UCLA’s head coach isn’t the only addition the Bruins have to be thankful for this year. Redshirt freshman quarterback Brett Hundley has helped redeem the program’s national spotlight. Last season, the Bruins finished 6-8 and 5-4, respectively. Evolving into a prolific asset, Hundley has developed the composure needed from a quarterback that the Bruins had been missing. His agility has allowed him to pick up yardage when he’s under pressure, while his completion percentage (69.4) and overall athleticism has landed him the fourth overall QB rating in the conference.

For the year, Hundley has amassed 2,973 passing yards to go along with 25 touchdowns.

Senior running back Johnathan Franklin has been an impactful player for the Bruins’ success since day one. Franklin, who has scored 10 touchdowns, is up for the Doak Walker Award for the nation’s best running back and ranks sixth in the country for rushing yards with a total of 1,441, while averaging 127 yards per game. He is also one of the 15 “Players to Watch” for the Walter Camp Football Foundation Player of the Year award.

Anthony Barr is another name that must be mentioned when discussing the Bruins’ success. He began the season by completely switching gears, going from fullback to linebacker. This switch turned out to be the best decision of his career. Now an option for defensive player of the year, Barr leads the Pac-12 in sacks with a total of 12 and has forced three fumbles.

If you dared to predict UCLA to have this type of success before the season began, people probably would’ve laughed at you. However, if there is one thing that can be agreed upon about the Bruins this year, it’s that they were highly underestimated, and it looks as though the rise of UCLA football has only just begun.