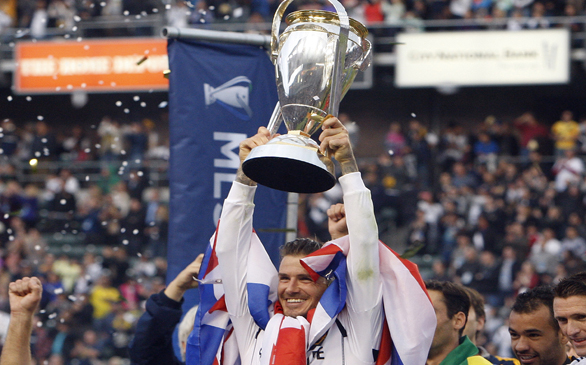 A drafty storage room deep in the bowels of the Home Depot Center hardly seems an appropriate place to meet with sporting royalty.

Along one cluttered wall stand rolling racks of old uniforms and sweat suits. An oversize World Cup soccer ball sits ignored atop a dusty table, while hanging from the ceiling a tiny mirrored disco ball begins to spin slowly when David Beckham, wearing ragged jeans, a white V-neck T-shirt and a gray wool hat, steps in for another in a seemingly endless series of goodbye interviews.

It's a stark contrast with Beckham's introductory news conference six seasons ago, when he strode into the stadium in a sharp gray suit as confetti rained down and a crowd of more than 5,000 – including Los Angeles Mayor Antonio Villaraigosa – cheered.

But then a lot has changed since Beckham joined the Los Angeles Galaxy and Major League Soccer in 2007.

For the team, Beckham's final competitive match in a Galaxy uniform – in Saturday's MLS Cup final against the Houston Dynamo – will mark its third championship-game appearance in four years.

For MLS, Beckham's departure figures to end one of the most dramatic growth spurts of any league in U.S. professional sports history, one that saw it go from 12 to 19 teams, add 10 new soccer-specific stadiums, more than double its overall attendance and increase worldwide merchandise sales by more than 230 percent.

"I don't think anybody would doubt that he has overdelivered on every one of those measures," MLS Commissioner Don Garber said. "There's arguably not a soccer fan on this planet that doesn't know the L.A. Galaxy and Major League Soccer, and David played a significant role in helping us make that happen.

"He was an unbelievable ambassador for the league, for the Galaxy."

But forgotten among all the self-congratulatory back-slapping and ringing cash registers is the fact that Beckham's wildly successful U.S. tour had a rocky start.

Despite all the pomp and circumstance surrounding his arrival in Southern California, Beckham hardly looked like a savior at the beginning, starting just two games in his first Galaxy season because of injuries – yet hanging around long enough to alienate team captain Landon Donovan and several other teammates.

Beckham missed only five games the following season, but the Galaxy finished with a franchise-low eight wins. So when Beckham spent most of 2009 on loan to A.C. Milan, Galaxy fans rebelled, loudly booing him on his return to the Carson stadium where he had been so warmly received 24 months earlier.

"No one expect(ed) him to do signings at the local Home Depot or drink with the supporters after the game," says Brian Lynch of Angel City Brigade, the largest of the Galaxy's three main supporter groups. "What we did expect though was 100 percent commitment to the team. That was questionable his first two years in L.A.

"Then something changed. He realized that being David Beckham wasn't enough. He decided to play for the Galaxy like he was playing Champions League games. When he started showing the team dedication, he earned our respect."

Beckham finished 2009 playing in all but 12 minutes of the Galaxy's postseason run that ended in an MLS Cup final that his team lost on penalty kicks. And he says that season, although a difficult one for him and the fans, was a transformative one as well.

"I had my ups and downs with the fans. I've never had that with any other club that I've played at," Beckham says. "But things have turned around so much that doesn't come into play anymore. They've accepted what I've hoped I brought to the league and the club."

Whatever the reason, Beckham's last two seasons have clearly been his best with the Galaxy. He's played more games than Donovan, the team's iron horse, while setting personal MLS single-season highs in assists (15, in 2011) and goals (seven in 2012). And the team reached the league championship game each time.

"David's last two loan-free seasons here have been his best," said Isaac Menchaca of the L.A. Riot Squad, the supporters group that led the boos against Beckham in 2009. "He's put in visible effort, and he's been very much the David Beckham we expected when he arrived."

There's also been a shift in perception in the Galaxy dressing room, where Beckham has become a team leader, a prankster who often gives as good as he gets.

"I've grown a lot as a person since he's been here," Donovan says. "I've watched him closely with all the things he does and his leadership ability and how he handles himself. It's been an inspiration for me.

"We haven't always gotten along, especially in the beginning. But he's a good person and I think we're all happy for him."

What comes next for Beckham he hasn't made clear. At 37, his soccer days are running out, though he's been careful to avoid using the word "retirement" since announcing the end of his Galaxy career.

In the near future he's expected to return to MLS as a team executive, probably as a partner with AEG, the group that owns the Galaxy. First, however, he has to get through Saturday.