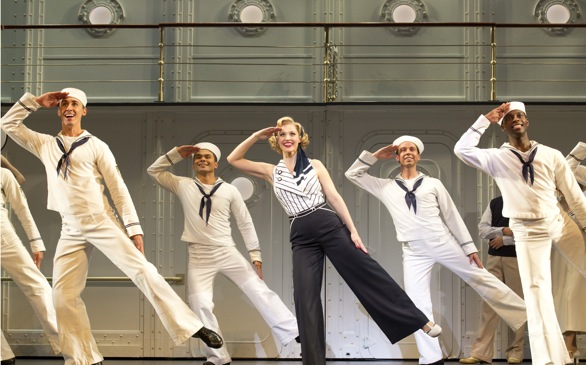 Rachel York steals the spotlight in the musical, "Anything Goes."
(Credit: Joan Marcus )

At the Ahmanson Theatre from now through Jan. 6, “Anything Goes” will feature music and lyrics by Cole Porter, the famous American composer and songwriter whose hits include “Night and Day,” “I Get a Kick Out of You,” and “I’ve Got You Under My Skin.” He is also known for composing the music and lyrics for “Kiss Me, Kate,” which won him the first Tony presented for Best Musical in 1949.

“Anything Goes” first hit Broadway in 1934 and London’s West End the year after. It has seen a film adaptation, a television version and revivals in multiple decades. The protagonist is Billy Crocker, a young Wall Street broker who is desperately in love with Hope Harcourt, a New York socialite whom he met one fateful night in a taxi. Crocker’s boss, Eli Whitney, is preparing to take a cruise from New York to London with none other than Hope and her mother. When Billy goes to see his boss off, he sees Hope and joins the cruise as a stowaway, plotting to win her heart.

However, Hope is engaged to Sir Evelyn Oakleigh, a British nobleman who acts more like a hapless buffoon than nobility. They are traveling across the pond to get married upon the insistence of Mrs. Harcourt, who has an eye for upping her social standing. Also aboard is “Moonface” Martin, a second-rate mobster posing as a minister and his sexy sidekick Erma. But the star of the cruise (and of the play) is Reno Sweeney, played in this production by Broadway veteran, Rachel York. A night singer with all the right connections, Sweeney thinks she’s in love with Crocker. That is, until they hit the high seas. Then, anything goes.

A hilarious comedy at the time of its release, “Anything Goes” struggles to relate to contemporary audiences. It hits some laughing points, but many of the jokes fly over the young heads of anyone born after 1940. However, Cole Porter’s music is as pertinent now as it was then, his lyrics adding much movement to the relatively stagnant waters of dialogue.

And York is a star. She embodies Reno with her every breath, and her singing numbers make you believe you’re right there with her in 1934. She has a way on stage; you simply won’t be able to take your eyes off her. The rest of the cast does what they can, but no one steals York’s thunder.

What should really draw you to see “Anything Goes” is the choreography, which won Kathleen Marshall a Tony in 2011. Incorporating tap, ballroom and even some salsa, Marshall knows just how to paint a tapestry with the few cast members on stage.

The choreography and York is a feast for the eyes, carrying you through the two and a half hours trapped on a somewhat out-dated boat.