Bloc Party Scores an Ace in the Hole with Four 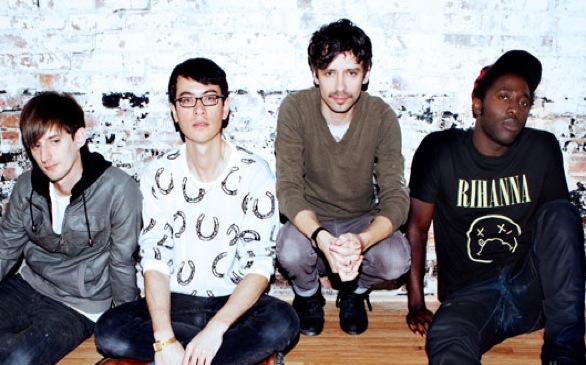 Bloc Party has reconnected for a fourth studio and is currently working on new material.
(Credit: Facebook.com/blackpartyofficial)

The British foursome Bloc Party first stepped into the former Eastern communist Bloc of Russia a couple of weeks ago for a spate of shows. It was unfamiliar territory; the media had forewarned the band of persecution of fellow musicians like feminist rockers Pussy Riot, and the returning reign of Vladimir Putin painted the vast nation as regressing to a violently red state.

But guitarist Russell Lissack recalls a gentler Mother Russia, a nurturing place where culture was blossoming, and the youth were opening their arms to what the rest of the globe's entertainment could offer them.

"When we got there, we just really didn't know what to expect," Lissack said in a recent phone interview with Campus Circle. "I was quite surprised by the amount of musical activity that seemed to be going on. There were a lot of other Western bands playing the same time as us."

The group's first foray into Russia parallels the release of Four, the Londoners' fourth album together. It takes the familiar elements of the back catalog – bratty, electronic-laced rock with a bit of Smiths-like sentimentality – and sprinkles them amid experimentation. The humid lurch of "Coliseum" would make a nice contribution to the "True Blood" soundtrack. The frenetic rattle of "Octopus" and "Team A" employs a custom guitar pedal that sounds like a snake operating a drill. A banjo evens makes a cameo on "Real Talk."

But Mumford & Sons, this isn't. The Bloc Party boys (Lissack, boisterous Kele Okereke on vox/guitar, stately Gordon Moakes on bass and animated Matt Tong on drums) still fancy a good old blazin' guitar solo. Lissack's Twitter profile touts his passion for rocking instrumental breaks, something that might be seen as a dying art form in the increasingly minimalist indie music world. Listen just once to "Kettling," and rejoice in a crunchy, celebratory signature Lissack lick— one that finds its place among the best Billy Corgan or Kim Thayil masterpieces.

"I guess there are two ways to look at it: Anyone can kind of noodle away and entertain themselves and get a bit self-indulgent, but I think it's very easy to slip into that trap," said Lissack. "There's a time and a place for an instrumental break in a song. But I think, in a way, you can be creative and make it mean something in the context of the song. That's something I always strive to do."

Veracity always shines brightly within Bloc Party's material. But the band members' sense of humor can run rampant in other settings. Prior to recording Four, Okereke caused a bit of hoopla when he posted online a photo of his mates gathering at a New York studio, seemingly without informing him. The speculation escalated when Lissack continued the farce in an interview, assuming the reporter would get the joke. That writer didn't, and suddenly the U.K. press was proclaiming that Okereke was out of the group and that Lissack, Tong and Moakes were auditioning new singers.

It wouldn't have been too far of a reach. After Bloc Party's 2008 EDM-influenced album, Intimacy, befuddled many critics and longtime fans, the foursome attended to varying projects: Okereke released a solid solo record; Lissack saw a childhood dream come true when he toured with Ash as its for-hire ax man; Moakes started the post-hardcore group Young Legionnaire; and Tong moved to New York and reveled in DJ gigs. The Partiers have admitted that their relationships with one another had grown distant after the Intimacy tour.

But as the saying goes, "Absence makes the heart grow fonder." The quartet reconvened in late 2011 through early 2012 to pen what would become Four, arguably Bloc Party's most varied and evolved offering yet.

Admirers of the blokes who first made their mark with the 2005 dance-floor riot "Banquet" will be pleased to hear that they won't be resting on their laurels in 2013.

"We're working on new material at the moment," Lissack revealed. "… You get sound-check at most of the shows, so we try to squeeze 30 minutes of songwriting in if we can. We've got a few ideas floating around, so if we could find some recording time next year, we'll put a song out— or hopefully a few songs out."