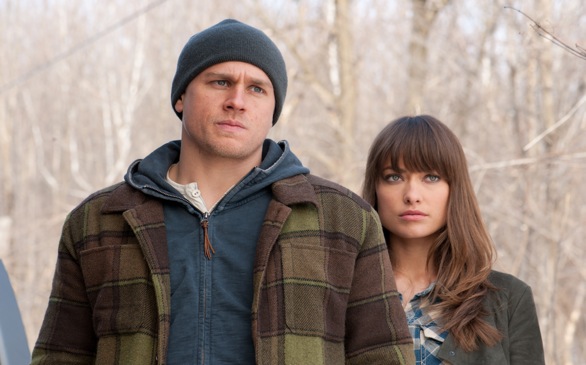 Wintery wonderlands summon cozy thoughts of holidays and picturesque fireplaces. This, however, was not the vision for Austrian director Stefan Ruzowitzky. With an Oscar already under his belt, Ruzowitzky’s latest film, Deadfall, has the feel of an old western with a modern take in a very white and snowy landscape.

The film opens with brother and sister duo Liza (Olivia Wilde) and Addison (Eric Bana) on the run from a robbery heist. Speeding along in a town car on the snowy roads of northern Michigan, they’re headed to Canada for their great escape. The trip abruptly comes to a stop when they fly over a snowy embankment. Now stuck in the middle of a very large blizzard, they decide to separate on their way to the Canadian border and reconnect there. Along the way, Liza meets a stranger, Jay (Charlie Hunnam from “Sons of Anarchy”) who unbeknownst to her is running from his own problems.

Deadfall takes some nasty turns with unforgiving surprises. Chock full of great actors, including Sissy Spacek, Kris Kristofferson, Treat Williams and Kate Mara, the cast helps round out this film and gives it cinematic gravitas.

Wilde said, “It was surreal to look around and see all these actors at one table. We were cornering Kristofferson and Spacek and peppering them with questions.”

Even though Kristofferson and Spacek weren’t the leads, as they play the parents of Jay, everyone was excited to have them on set.

“They are sort of the iconic American parents, and this house we filmed in is as good as it gets,” said Ruzowitzky. “They really liked the idea to work together for the first time as well. Each had admired each other from a distance.”

When watching the film, you can’t help but feel the cold penetrate the actors. Shot in Quebec but taking place in northern Michigan, the snow became a very important factor.

Ruzowitzky added, “The landscape and the snow are like an additional character, and it plays an important part.”

Chiming in, Wilde said, “I love that the snow adds two parts; you can hide things in snow and clean up a mess really quickly while also revealing a lot.”

Noting that the snow was like another character, the cold also started to get into their heads. As the cast chuckled about the cold fondly now, there was once a time when that wasn’t the case.

“I was excited to shoot a movie in the cold weather. I shoot “Sons of Anarchy” in L.A. over the summer,” said Hunnam. “I’m a skinny guy who wants to look big so I wear several layers of clothing and it’s gets really old being that hot. However, after a couple days in the snow I was craving sunshine. When you’re hot you get a little bit grumpy, but when you’re cold it’s really debilitating.”

At the same time, an authentic set was appreciated.

“I would so much rather be cold in real snow, than comfortable and warm traipsing around in fake snow,” said Bana.  “Selfishly, as an actor we saw ourselves around the Thanksgiving table and forgot about the snow, and one day I was talking to the producer and remember him saying: ‘I don’t know about you but it didn’t read like this?’ I don’t think you always equate how it will really be until you’re in it.”

Hunnam talked a little about his process in finding the character Jay.

“The trick is to identify a way to get close to the character emotionally without having to have resort to intellectual analysis,” he said. “I got into a very dark and happy place while shooting this film.”

“For some reason, Southern accents are easier for Australians and has to do with our lazy way of speaking,” he said. “The only movie where I was allowed to speak in my native tongue was Funny People, and everyone complained they didn’t like my accent!”

Deadfall will keep you on your toes as you watch the characters in the midst of challenging natural elements.