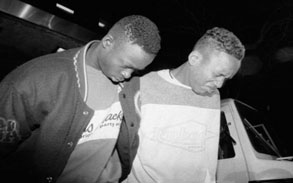 New York Mayor Ed Koch didn't shrink from calling it "the crime of the century." A TV newscaster talked angrily about evildoers who "blazed a nighttime trail of terror" that culminated in the horrific beating and savage rape of a Central Park jogger on the night of April 19, 1989. The event became an all-consuming national sensation, but, as it turns out, everything everyone thought they knew was wrong.

This is the devastating premise of The Central Park Five, a careful, thoughtful documentary that meticulously re-creates what happened on that night and details how and why everything went so terribly off-course. Co-directed by Ken Burns, David McMahon and Sarah Burns, it projects equal parts fury and despair as it reveals how a particular group of individuals was caught in the unforgiving gears of the criminal justice system.

Five black and Latino teenagers, ages 14 to 16, admitted to the rape and beating (though they almost immediately recanted) of the white jogger and served prison sentences ranging from six to 13 years. But, out of nowhere, compelling new evidence, including a startling 2002 confession by a convicted murderer and rapist whose DNA was present at the crime scene, led a judge to overturn their convictions. Yet it is one of the case's painful ironies that to this day it is the arrest and not the ultimate exoneration that is remembered.

"I wish I had been more skeptical as a journalist," says regretful New York Times columnist Jim Dwyer, one of the film's key voices. "A lot of people didn't do their jobs: reporters, police, prosecutors, defense attorneys. ... Truth, reality and justice were not part of it."

The Central Park Five also serves as a cinematic primer on what has become one of the most disturbing aspects of our criminal justice system: the ability – and the unabashed willingness – of police to psychologically manipulate people into confessing to things they have not done.

"The goal is to break the suspect down to helplessness and despair," says the film's Saul Kassin, a social psychologist and expert in coerced confessions. "Once the confession is taken, it trumps everything else, it trumps DNA evidence, its effects cannot be reversed."

Though Ken Burns, who has directed PBS documentary series on jazz, baseball and the Civil War, is the best known of the trio of filmmakers, The Central Park Five started not with him but with his daughter and co-director, Sarah Burns.

Nearly a decade ago she had a summer internship with a Manhattan law firm involved with the five men. She was so moved by their story that instead of going to law school she turned her interest into a book, also called The Central Park Five, which subsequently became the basis for this film.

This longtime relationship with the five – Antron McCray, Kevin Richardson, Yusef Salaam, Raymond Santana and Korey Wise – has given the filmmakers exceptional access that led to uniformly honest and heartfelt interviews. We get a sense of each of the five (even McCray, who chose to talk on audio, not film), and we also meet key family members who received considerable antagonism from the public as well.

Central Park Five begins with none of these people but, rather, with the chilling taped audio confession of Matias Reyes, played over footage of the scene of the crime. "I'm the one that did this," he says, and we are not inclined to argue.

Then the film steps back and details the atmosphere of racial conflict and confrontation that characterized New York in the 1980s. "The most endangered species in America was the young black man," says the Rev. Calvin Butts, who admits that even some black parents "were frightened by their own children."

It's only now that we meet the five suspects and hear how they came to be arrested as part of a group of roaming Central Park teens. Once the attack on investment banker Trisha Meili was discovered, the police, under tremendous pressure to solve the crime ASAP, convinced themselves that these were the guilty parties and methodically went about getting them to confess.

The most disturbing part of Central Park Five is hearing about the techniques veteran police interrogators used to mislead and outright lie to these suspects, seen on video as little more than children. Tellingly, no one from either the police or the district attorney's office was willing to go on camera and defend their conduct.

A chance meeting in prison between Wise and Reyes led the latter to come forward and say, "I met somebody doing time for a crime I did." By that time, each of the five had spent years inside and had their lives blighted. They have filed a lawsuit which is pending, but money clearly is not the point here. As Wise says, "No money could bring that time back. No money could bring the life that was missing or the time that was taken away."

The Central Park Five is now playing in select theaters and releases on VOD Dec. 7. For more information, click here.