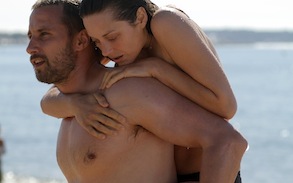 Matthias Schoenaerts as Ali, left, and Marion Cotillard as Stéphanie in Rust and Bone.
(Credit: Roger Arpajou / Why Not Productions, Courtesy of Sony Pictures Classics)

American filmmakers ought to rethink some of their ideas when making films. At least, that’s what the film Rust and Bone makes me think.

From beginning to end, Rust and Bone – directed by Jacques Audiard (A Prophet, 2009) – touches on many themes including love, sex, family and life’s passion for individuals.

The film, which premiered at this year’s Cannes Film Festival, keeps audience members on the edge of their seats from the moment it starts with Ali (Schoenaerts) and his 5-year-old son, Sam (Armand Verdure), on a train travelling from Belgium to France. Verdure is adorable as Sam, the victim of many unfortunate things.  His mother has used him to smuggle drugs, and his father neglects to provide affection or fatherly love.

In addition to carrying an utterly entertaining plot, both Schoenaerts and Cotillard deliver impeccably memorable performances, redefining acting by stepping onto an entirely different plateau.

The argument could be made that it might very well have to do with their particular roles. Ali goes from being a bouncer at a nightclub, to a nighttime security guard, to a street kickboxing fighter. Stéphanie (Cotillard), on the other hand, serves as an Orca whale trainer at a local marine park, who is the victim of a tragic incident during a show.

Having met earlier, Stéphanie makes a surprising phone call to Ali, who does not remember her until she vividly reminds him. From there on, the two begin a distinctive bond with one another – a bond that guides them to a close and personal relationship featuring sex, motivation and more.

Stéphanie, who at first makes no effort to revive her life after the horrible accident, begins to believe in not only herself, but in Ali as well.  She also becomes somewhat of a mother figure to Sam, and Ali is able to accept what it means to be a father.

In Rust and Bone, we are not just entertained and mesmerized by acting displays; we are also given a unique taste of French cinematography that leaves us pondering certain aspects of life, challenging us to believe that goals are attainable despite current circumstances.

For what it’s worth, Rust and Bone is one of the best foreign films I’ve seen within the last five years and a must-see flick for 2012.

Rust and Bone releases at ArcLight Hollywood and The Landmark in West L.A. on Dec. 7. It's now playing in select theaters in New York. For more information on Rust and Bone, visit sonyclassics.com/rustandbone.