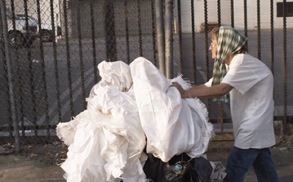 This film will introduce you to real homeless people living in L.A.'s Skid Row.
(Credit: lostangelsfilm.com)

Living in Los Angeles, homelessness is nothing new to us. We see it every day when we take the freeway to work, pick the kids up from school or go grocery shopping. In fact, homelessness has become so common in L.A. that most have come to ignore it. But with approximately 50,000 homeless people in the community (according to Lamp Community, an organization that strives to end homelessness in L.A. through services and housing), it’s not something that can or should be ignored.

Lost Angels: Skid Row is My Home, which is executive produced by Gary Foster (The Soloist, Daredevil and Sleepless in Seattle), is an informative yet emotional documentary that takes a look at the lives of eight homeless individuals living on Skid Row. Skid Row is a 50-block sector in downtown L.A., east of the Financial District and Alameda Street, west of Main Street, south of Third Street and north of Seventh Street – only about 3 miles from the University of Southern California.

The beauty of this documentary lies in its ability to connect audiences with the eight homeless individuals as well as educating audiences about the politics and economics behind the homeless issue in L.A.

Director Thomas Napper introduces you to an old woman who loves pushing her shopping cart filled with trash and taking care of the cats and birds on Skid Row; a man who loves and cares for this woman; a former silver medalist Olympic track and field star who fell from his throne thanks to a drug addiction; a man who battles schizophrenia, drug addiction and gender identity; a woman suffering from countless tumors on the outside and inside of her body; a man who works to stop police abuse and brutality on Skid Row; a mother who is also recovering from drug addiction; and a former thief/drug dealer who gives back by cleaning Skid Row’s sidewalks.

As you learn more and more about their histories, current struggles and plans for the future, you can’t help but become emotionally invested in their stories. At the end of the film, audience members can expect to be surprised when they learn one of these homeless individual’s fate.

What’s quite astounding is how Lost Angels is able to explain the complexities of gentrification and homelessness in a simple way. After watching this film, audiences will easily understand that because downtown continues to expand, many poor people lose their units and homes that have been transformed into luxurious lofts and apartments. The result: More homeless people sleeping on the sidewalks of Skid Row. This (along with other factors) has contributed to an increase in homelessness over many, many years.

The documentary also takes a look at the increase of police presence in the area, a result of the Safer City Initiative launched in 2006. The film depicts police scouring the Skid Row area, searching through homeless people’s tents and belongings and arresting thousands for simply laying and sitting on the sidewalk. The police even arrest the homeless for possessing (wait for it) plastic crates.  Lost Angels explains that incarceration and a constant police will not solve the homeless issue in L.A. – only housing and services for the mentally ill and poor can do that.

Lost Angels has the potential to open L.A.’s eyes to the plight of homelessness, stopping people from pretending that the homeless are invisible and that the situation is normal. With this documentary, perhaps the community and government will make more of an initiative to actually help the homeless rather than stigmatizing and incarcerating them.

Lost Angels: Skid Row is My Home will have an exclusive civic engagement on Friday, Dec. 7 at the Hollywood Arclight on Sunset and Vine. For more information and showtimes, visit arclightcinemas.com or call 323-464-4226. There will also be a special Q&A with filmmakers and Lamp Community clients following the Friday, Dec. 7 and Saturday, Dec. 8 main evening shows.