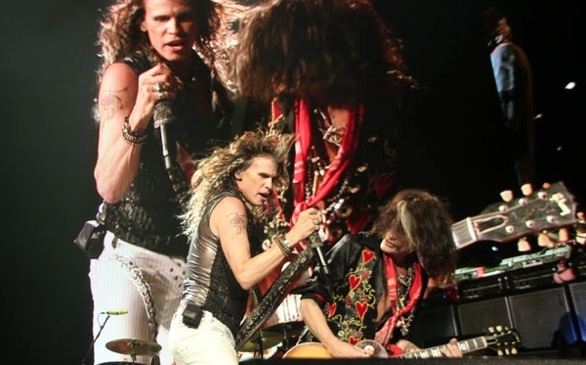 Steven Tyler and the rest of the band members performed their hearts out.
(Credit: Amanda Ayre (aeroforceone.com))

Aerosmith has got a lot to prove nowadays. In the wake of image-defying TV appearances, a decade of less than stellar album releases and an ever-aging core fan base, the band must really take advantage of this current tour in order to leave the kind of lasting impact that its musical catalogue is worthy of.

At last night’s show with Cheap Trick at the Staples Center, all five members burst on the stage, ready and equipped to do just that.

The set began with an explosive intro. Utilizing all four corners of the stage, the band tore into the opening number “Toys in the Attic,” with vocalist Steven Tyler erupting from the front of the stage’s downstage runway via a trap door elevator. The audience stayed on their feet through the follow-up, “Love in an Elevator,” as the band worked on finding its groove for that night’s performance.

The momentum completely stopped, however, when the third song of the set, “Jaded,” put the entire crowd back in their seats. Most fans would agree that the band could have gone ahead and skipped any tracks of off Just Push Play. But for some reason “Jaded,” that misplaced pseudo-hit from 2001, made its way into the set. It seemed like more of a formality than a moment. Tyler appeared to be the only person in the arena that was actually enjoying the song. People from the front row put their hands and heads down, and Joe Perry shrugged his way through it, feigning interest and dawning the annoyed expression of someone who was just waiting for the song to be over.

It took the band about four songs to get going again. Following “Jaded,” Aerosmith moved into a pretty generic rendition of “Oh Yeah.” It wasn’t until the fifth song, ”Living on the Edge,” that the show really picked up a head of steam.

The introduction of the song seemed a bit precarious. It was a bit jumbled and off time. But all five members found each other at the big, one-beat rest that hits right before “Livin’ on the Edge’s” first refrain. The sound going into that chorus was massive, and it really set the tone for the rest of the show.

From there on out, it was Aerosmith as we always have known them. Tyler and Perry took control of the downstage runway that extended deep into the open floor. Tom Hamilton, Joey Kramer and Brad Whitford held their ground and really played their characters.

Hamilton was all over the stage and Whitford had a dirty, old school guitar solo that was delivered with the poise and precision of a seasoned vet and a true master of his instrument. Kramer’s drum solo was a bit long, drawn out and often rudimentary, but he can still lead a crowd from behind the kit. The band also did a poor job of introducing Kramer’s solo, which kind of left a dead hole in the middle of the set.

But last night’s standout musician was, without a doubt, Perry. Adorning an atrocious, clearly ironic, reverse handle bar mustache, Perry came out of his shell halfway through the set and ripped through his routine like a string wielding monster. Shredding off the ground, behind the back and more than once with two guitars, the man is like a machine when he’s in the zone. The only problem is, you can tell when he’s not. And for the first half of the set, he wasn’t, and the resulting energy was slightly abrasive.

At its peak of energy and enthusiasm, Aerosmith brought out a guest guitarist who stole the show right out from under everyone’s feet. A recent collaborator on Aerosmith’s latest album, Music From Another Dimension, actor Johnny Depp was brought out to play guitar for a cover of Fleetwood Mac’s “Stop Messin’ Around” as well as a rendition of the Beatles’ “Come Together.” Depp is surprisingly agile with a guitar, and the audience was thrilled by his appearance. And more than just a mid-show spectacle, the extra guitar actually added to the sound. “Come Together” came out really crunchy during its distorted refrain.

The shows momentum held out through the set closer, “Walk This Way.” By the end of it, however, you could tell that the band, particularly Tyler, was getting tired. Halfway through the song, Tyler was having trouble keeping his breath and hitting his notes. He handled his exhaustion with grace and control, but the sound still added a sense of malaise to the end of the set.

The show’s first encore, “Dream On,” was more show than song. Tyler just barely made it through the first verse when Perry ran up and jumped on the vocalist’s shimmering, white, baby grand piano and burst into a guitar solo that saved the whole moment.

From there, the encore headed into a less-than-inspiring rendition of “Mama Kin” with Izzy Stradlin jumping in on guitar. The set closed with “Walk This Way,” which required way too much energy to be featured at the end of a set; it was lugubrious and slightly off. Definitely a good moment to head out of the venue and beat the traffic.

Despite being understandably tired at the end of their high-energy set, Aerosmith showed up to play last night. With minor holes, technical issues and a few poor choices with regards to song selection, it was by no means a perfect concert.

Was it worth the price of admission? If you’re any kind of an Aerosmith fan, then yes, it probably was. If you’d seen them before, though, then you’ve probably had better.