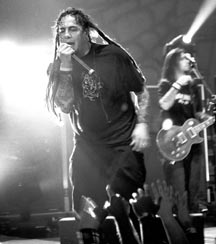 The audience watched as performers at the Wiltern ran the gamut of musical taste. Italian imports Lacuna Coil served up a dose of theatrical goth rock highlighted by razor sharp vocals, while Hazen Street dished out eclectic hip-hop layered over a solid rock core. Sweden’s Blindside proved that the emo-screamo plague has effectively polluted Europe, and P.O.D. delivered a set that faintly exhaled the last gasp of nu-metal.

P.O.D.’s performance bordered on over-dramatic, while the band’s "message" overwhelmed and suffocated their music. Frontman Sonny Sandoval’s constant dialog with the audience about "family" and "loving one another" bordered on that of an inspirational speaker. This message is often shared effectively at live shows by other bands — like Ozomatli — yet bands like Ozomatli don’t let their plea for peace overshadow their musical capabilities.

P.O.D. kept preaching its message as opposed to letting the audience feel the message through the quality of their performance. P.O.D. seems to have lost that whiplash intensity that initially got the band noticed and, if the band isn’t careful, is in danger of becoming a parody of itself.