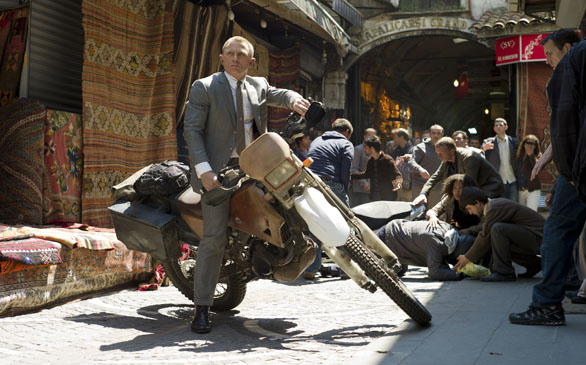 Americans associate the holidays with many things: mob scenes at the malls, heavy meals with the relatives and an abundance - some would say overabundance - of movies.

Award-worthy movies. Family movies. Big action spectacles. Small indie tear-jerkers. All of which are lumped into a convenient package with a Hollywood bow on it called the holiday movie season.

It's the time of year when the studios jockey for the biggest slice of the audience pie as well as promoting their prestige films for the plethora of awards to come, including the Golden Globes, the guild awards and the crown jewel, the Academy Awards - in other words, pursuing both cash and class.

"Everybody is competing for awards during what is now known as awards season, but they are also basically competing for grosses," noted Michael J. Taylor, chairman of film and television production at USC's School of Cinematic Arts and producer of such films as 1996's Bottle Rocket. "I think the multiple awards helped to create the horse race and serve as a terrific marketing tool for the movies."

Holiday-themed movies have been with us since the birth of cinema, but the advent of a designated "holiday movie season" is a relatively new phenomenon, according to film historians and industry observers. Unlike the "summer movie season," which is linked directly to the release of one movie - Jaws in 1975 - the origins of the holiday movie season are less precise.

The release of King Kong around Christmas 1976 on almost 1,000 screens - a huge opening for that time - set the stage for the wide-scale holiday release, but that was only one of many factors that set in motion the end-of-year movie free-for-all.

The holiday movie season may be bigger, but is it necessarily better?

"I find it so businesslike," said film historian Stan Taffel, who recalls the special thrill of seeing Disney animated classic films re-released for the holidays.

"There was a time people would want to make a movie for entertainment, but in this day and age ... Skyfall hadn't even opened yet and people were on the news talking about Oscar buzz. It's just a propaganda machine. It's not enough that the film is going to make half a billion dollars in its first week. Now they want to be awarded for it."

Before television entered homes after World War II, there really were no distinct movie seasons. The only competition movies had was radio. "People went to the movies every week and saw pretty much every movie that was released," said Taylor.

There was often an uptick in viewers during the summer not because of the release of big action blockbusters as is the norm today but because theaters were among the few places that were air-conditioned, allowing people to beat the sweltering heat.

Studios often would release prestige films at the end of the year - for example, Gone With the Wind in 1939 - but only in big theaters in Los Angeles and New York. Sometimes it took months or even years for a film to hit smaller cities and towns.

"When Radio City Music Hall was thriving, you could make hundreds of thousands of dollars in one week," said movie critic and historian Leonard Maltin. "It was the biggest theater in the country, and having your movie booked as a Christmas attraction was money in the bank." (In the 1972 Oscar-winning The Godfather, the 1945 holiday film The Bells of St. Mary's is playing at Radio City Music Hall.)

TCM host and author Robert Osborne noted that "if a film got into the Music Hall, it could get a lot of bookings around the country." Opening a film in Los Angeles and New York during the holidays would also give the studios time to promote it to the rest of the country.

Though there were Oscar contenders released during the holidays, Osborne said the studios mostly liked to release musicals and comedies during that time. "That is when people wanted to have a good time," he noted. "MGM would put out an Esther Williams movie or Paramount would put out a Bob Hope comedy or a Betty Hutton comedy."

Paradoxically, because the studios were factories churning out movies weekly, films were booked into theaters when they were completed. So many of the beloved holiday movies, including Holiday Inn, Miracle on 34th Street and Going My Way, were released during summer.

Studios didn't really start looking at the Oscars as a marketing tool for their movies until after World War II, according to Osborne. "It took awhile for the Academy Awards to mean anything at the box office," he said, adding that it "was considered kind of gauche" to mount huge Oscar campaigns back then. But box office started to wane after the war. "All of a sudden, a lot of people were not so enthused about going to the movies," Osborne said. "That was also around the time TV was on the horizon and things started to change."

With families content to stay home to watch TV, "getting an Oscar started being very important," said Osborne. Studios were able to lure people out of their living rooms and into the theaters promoting films that were Oscar contenders, so they began to release them at year's end, closer to the time of awards voting.

No one can really pinpoint whether there was a holiday movie version of Jaws, which opened on 409 screens on June 20, 1975, before expanding to 675 in July. But Randy Haberkamp, the Academy of Motion Picture Arts and Sciences' managing director for programming, education and preservation, recalled the publicity onslaught for Dino DeLaurentiis' action thriller King Kong, starring Jeff Bridges and Jessica Lange in her feature debut. The publicity, he said, began a year in advance.

King Kong opened on Dec. 17, 1976, on 974 screens. Two years later, the big Christmas attraction was Richard Donner's Superman, followed in 1979 by Star Trek: The Motion Picture, which played on more than 1,000 screens in its wider release. The era of the wide-release holiday movie had begun. Today it's not unusual for big seasonal releases to open on 3,000 or more screens.