Facebook Sets Its Sights on Its Next Billion Users 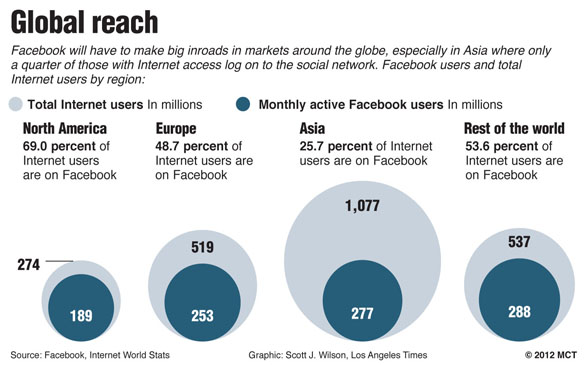 In just eight years, Facebook signed up more than half the world's Internet population.

Now it's going after the rest.

Facebook wants to reach every single person on the Internet whether they are logging on from a laptop in Los Angeles, an iPhone in Tokyo, or a low-tech phone with a tiny screen in Nairobi.

It's parachuting into market after market to take on homegrown social networks by currying favor with the locals and venturing where many people have spotty - if any - access to the Internet.

In Japan, it lets users list their blood types, which the Japanese believe give insight into personality and temperament, much like astrological signs in the Western world. In Africa, Facebook markets a stripped-down, text-only version of its service that works on low-tech mobile phones.

International growth is crucial to maintain its dominance as the world's largest social network. The company's scorching pace of growth has cooled especially in the United States. Facebook must coax users to sign up - and make sure it remains popular with the users it already has - or risk being knocked from its lofty perch.

"We're not a company that is just trying to add more people," said Chris Cox, Facebook's vice president of product. "What we are trying to do is build a service that everyone in the world can use."

But overseas growth that once seemed to come so easily is slower now. Facebook has already saturated most major markets around the globe. Eight out of 10 Facebook users are outside of the U.S.

"I don't think that Facebook has a chance of attracting another billion users," Wedbush Securities analyst Michael Pachter said.

Inside Facebook's Menlo Park headquarters is a small army out to prove naysayers wrong. Above their desks, they have hung flags from around the world that represent their nationalities. They obsessively scan screens that track user growth around the world.

They cheered and popped open champagne in September when the number of active Facebook users crossed 1 billion. But the moment of jubilation quickly passed as they redoubled their efforts to spread Facebook around the globe.

Naomi Gleit is the soft-spoken, headstrong 29-year-old product manager in charge of growth at Facebook. She says Facebook's future is on mobile devices, the medium by which most people will experience the Web in coming years. Facebook now works on more than 2,500 different phones, helping it gain a foothold in emerging markets. And it is forging relationships with mobile phone operators around the world.

Gleit's 150-member team has boots on the ground in far-flung places armed with low-tech phones and cheap data plans. Even team members here carry Nokia phones alongside their iPhones to update their status or check their News Feed.

"We originally built a product for ourselves," Gleit said. "This is different. Now we need to understand the experience of users who are not like us."

In 2009, it launched a clever tool to help Facebook users find their Orkut friends on Facebook and instantly send them friend requests. Two years later it swiped Google's top executive in Latin America, Alexandre Hohagen. Facebook sprinted ahead of Orkut one year ago, and now has 61 million active users in Latin America's largest country.