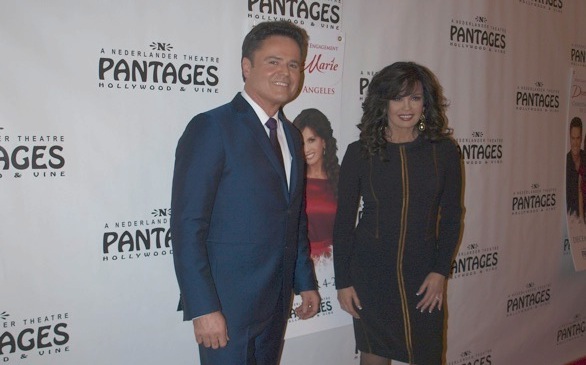 The pair will sing songs from the past as well as favorite holiday tunes.
(Credit: NIta Gandhi)

The brother-sister duo have been performing together and solo for five decades, and the Christmas show is a great way to kick off your holiday season.

In the show, they perform a mixture of Christmas songs from the past and present.  A current song they perform is "It's a Beautiful Life," which hit number one on the Billboard charts this year. Donny and Marie also sing their classic song “A Little Bit Country, A Little Bit Rock ‘N Roll,” which is most well known from their variety show, “Donny & Marie.” And just like the song, Marie is "a little bit county" on her solo part and Donny is "a little bit rock and roll" with his.

The duo’s brother-sister antics were there, which is classic “Donny & Marie,” with Donny making fun of Marie not winning “Dancing with the Stars.” This, along with other antics and jokes, made the audience laugh.

Looking at the audience there was a mix of all ages because Donny and Marie have been performing for five decades and have a wide range of fans. The women in the audience went nuts when Donny sang "Puppy Love." Then later, everyone in the audience did the same for Marie when she sang a beautiful aria from an opera.

Prior to the show, I thought “Donny and Marie – Christmas in Los Angeles” was going to be like the duo’s show in Las Vegas, and it was. The only thing different from the Vegas show was that this holiday show had Christmas songs thrown in.  However, it didn’t make the show or their performances any less entertaining.

The one thing that Donny and Marie are best known for is reinventing themselves. They both have had successful duo and solo careers, yet they manage to make new songs every five decades, gain new fans and keep the old.

They sing, dance and can act.  No doubt they are professionals in what they do.  They pull off the show without a hitch. I would recommend seeing this show.  If you want to be entertained by people who have been performing for a very long time, go see “Donny and Marie – Christmas in Los Angeles.”