Notre Dame-Alabama Matchup is on the Bowl Marquee 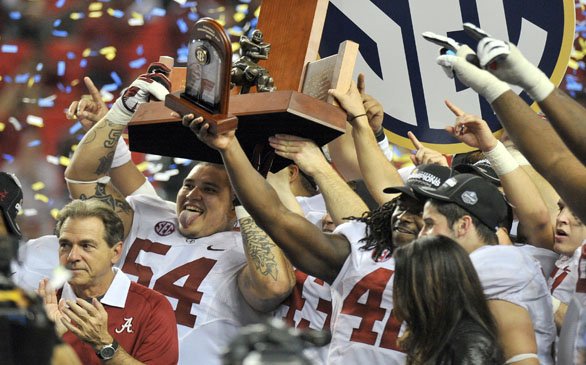 It will be the most anticipated BCS title game since Southern Cal and Texas got together following the 2005 season.

And not because Alabama is going for a third ring in four years. Been there, seen that.

The hype for Jan. 7 in Miami has everything to do with the presence of Notre Dame, which hasn't been in this position in nearly a quarter-century. The longest the Fighting Irish have ever gone between trophies before this present drought was 16 seasons (1949-66).

It isn't over yet. They won't be favored against the Crimson Tide, which beat Georgia in Saturday's big-boy SEC final in Atlanta, 32-28, a game that ended with the Bulldogs on the Alabama 5-yard line.

So the Irish, the only remaining unbeaten that isn't on NCAA probation, didn't have to wait until Sunday night's BCS selection show to know who they'd be getting in Sun Life Stadium. That was nothing more than a formality.

They weren't ranked in the preseason. Alabama started second, behind Southern Cal. Doesn't matter now. The last team to finish first after not starting in the top 25 was Brigham Young in 1984.

This will be the seventh time these guys have met, and first since 1987, the only time ND was ranked higher. ND's won all but one (1986, Lou Holtz' fourth game). The two everyone remembers most were the bowl games in 1973 and '74. First, in the Sugar (when it was still played at Tulane Stadium), the third-ranked Irish beat No. 1 Alabama, 24-23, to get Ara Parseghian his second title. A year later in the Orange he won his final game by getting past No. 2 Alabama, 13-11. That's how close Bear Bryant came to having two more rings.

Don't think the non-Auburn portion of that state have forgotten. Or forgiven.

Each has won eight Associated Press (media) titles, more than anyone else. Somebody's going to break the tie.

"We created a great opportunity for ourselves," said Tide coach Nick Saban, who also won it all at LSU in 2003. Two of his titles have been with one-loss teams. "A lot of people are excited to see . . . (this) matchup."

It will be his first trip back to Sun Life since his brief stint with the Miami Dolphins, the team he insisted he'd never leave.

"I'm not concerned about (the) external factors here," Saban noted.

But as always, there's never any shortage of haters when it comes to the Golden Domers.

"I think there's a dividing line where it's 50-50," Kelly acknowledged. "It's college football. There's great passion. I don't know if we picked up any more fans along the way . . . It's great for (the sport) to have both teams.

"Certainly the tradition of (each) brings a special attention to it."

Alabama has scored 35 rushing touchdowns. Notre Dame and Heisman Trophy candidate Manti Te'o have allowed two. The Tide gashed Georgia for 350 yards on the ground, averaging 6.9 per carry. Maybe the blokes opening those holes should get a little Heisman love too.

The Irish have beaten 10 bowl-eligible teams, including Pac-12 champion Stanford (in overtime) and 12th-ranked Oklahoma (by 17 on the road). Still, the SEC is the SEC. And Alabama is, well, 48-5 the last four years.

The countdown is officially under way. ESPN might not be able to contain itself. Let the onslaught commence.

First off, Georgia got a bum deal, after coming within a play of proceeding directly to South Beach. Instead they had to settle for the Capital One Bowl, where they'll face Nebraska, which got clocked by Wisconsin in the Big Ten final. That's what can happen when only two teams from one conference are allowed to go BCS bowling. So Florida, which Georgia beat to win the SEC East, goes to the Sugar against Big East champ Louisville, which won a four-team (or half the conference) tie by virtue of being the highest in the BCS standings. It's the Cards' first major bowl since the 2006 Orange.

The Fiesta Bowl came up a winner with Oregon and Big 12 champ Kansas State, which were 1-2 in the polls three weeks ago. Oregon lost in the BCS final two years ago and won the Rose last season. K-State's lone BCS appearance was the 2003 Fiesta.

Wisconsin is back in the Rose Bowl for the third straight year, but this time as the first team to get there with five losses. The Badgers are trying to avoid becoming the second Big Ten team to lose this game three consecutive seasons (joining Michigan 1976-78). Their opponent will be Stanford, which hasn't been to Pasadena on New Year's since it lost to Wisconsin in 1999. The last time the Cardinal won there was 1971. It was in the Orange and Fiesta the last two years.

Then there's the Orange, which gets Florida State and Northern Illinois. The Huskies, the first MAC team to play in a BCS bowl, will be without coach Dave Doeren, who's now employed by North Carolina State. They made it by finishing in the top 16 in the BCS standings and finishing ahead of one of the six automatic qualifiers (Louisville). Since Oct. 2 of 2011 NIU is 21-1, the best record in the country. Its blemish was in the opener to Iowa, by a point, in a game it led by eight with 10 minutes to go.

Did we mention that a record seven MAC schools got bids? Or that NIU quarterback Jordan Lynch is one of the better players you've never heard about?

NIU's gain kept Oklahoma out. Hey, it can't be a BCS without some controversy. The previous seven non-AQ teams that got this far were unbeaten. Oh well. NIU didn't make the rules. FSU hasn't been in one of these games in seven years.

There are 35 bowls, which of course is way too many. Nobody will care about a bunch of them unless you're into point spreads. Somewhere along the way, 6-6 became good enough. Yet somehow, there wasn't room for 9-3 Louisiana Tech, which was ranked not that long ago and has the top-rated offense in FBS.